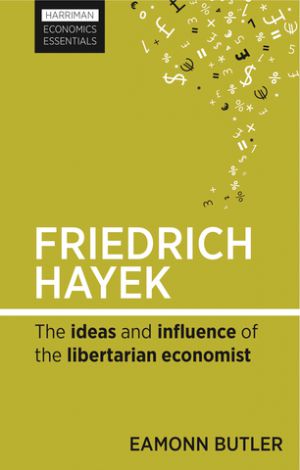 Dr Eamonn Butler is Director of the Adam Smith Institute and author of the forthcoming book "Friedrich Hayek: The Ideas And Influence Of The Libertarian Economist" (Harriman House). Follow Eamonn on Twitter.

The government of a free people must be a limited government. Freedom means we minimize coercion. Only the state is allowed to use force ? and even then, only to resist and discourage coercion by others. But we cannot trust our leaders with power any more than we should trust ourselves with it. Hence the need for constitutional restraints on its use.

Some Liberals ? and liberals ? argue for House of Lords reform as being more democratic and accountable, and that in a genuinely bicameral government, each elected chamber of Parliament would restrain the other.

Unlikely. Little is achieved by separating powers that are themselves unlimited. In the House of Commons, ministers have all the powers than George III had at his zenith. As power drifted from monarchs, it simply ended up in Parliament. The institution that was originally set up to protect the general public from the unlimited power of the executive now harbours that same executive. And many of the MPs who should be defending us against such power cannot in fact wait to wield it.

An elected Lords, armed with ?democratic? legitimacy, would expect precisely the same powers as the Commons. If ministers still sat in the new chamber, the same conflict of interest would do the same disservice to the public.
Certainly, when collective decisions are needed, they are best made democratically. But that does not mean that the elected majority should have unlimited powers to bend minorities to their will. Even the most ardent democrat knows that democracy must be limited ? we do not give votes to children, for example. And if democracy is not to elide into tyranny, there must be restraints on how government works and what the elected majority can force on others. With no such restraints, our politicians garner support by granting favours to special interest groups. As the government favour-machine expands, the potential gains from lobbying it get even larger. This is legalised corruption that leaves the general public utterly unrepresented.

That is why we have constitutions ? not that many, even the much-vaunted American constitution, have actually been very effective at restraining the power of elected majorities. And it is why we certainly cannot allow the politicians of today to decide the constitution that will bind us all tomorrow. That, as the great liberal thinker and Nobel economist F.A Hayek (1899-1992) put it, is like leaving the cat in charge of the cream jug.

Astonishing, therefore, that politicians believe they have the power to change the constitution without even consulting the public. Our political class just doesn?t understand the nature of constitutions and the rule of law. The entire purpose of constitutions is that they provide a safeguard for everyone. Only if we all accept the machinery of government is there any chance that minorities will not be exploited or bullied by elected authorities ? through envy taxes, for example, or through pious restraints on people?s lifestyles. The trouble today is that too many of us find ourselves in the exploited, bullied minority.

Hayek devoted much of his life to this problem of restraining government power. I think he would be much dismayed by the current debate on Lords reform.

True, he would like the idea of members being elected for long terms. In his own constitutional proposal, he suggested a fifteen-year term, after which members would not be eligible for re-election, but would become honorific ?lay judges?. So they would not be dependent on party favours while in office, nor concerned about their future beyond. They would, in other words, be harder to corrupt.

As to how to elect such a chamber, Hayek insisted that it should be by some completely different method that would produce a completely different membership. Otherwise, a reformed Lords would have the same flaws as the present Commons. He suggested annual elections by and of people reaching the age of 45, creating an assembly of people aged 45-60 (still younger than in most present-day Parliaments). This sort of year-group class prize would, he thought, ?come nearer to producing the ideal of the political theorists, a senate of the wise, than any system yet tried.?

But the second difference is even more crucial. The single role of this new body would limit the authority of the other. It would strike out legislation that was designed to favour or penalize particular groups (unions, ?the rich?, media moguls, failing industries?) Commons legislation, therefore, would have to apply equally to everyone, including the future generations so dismally exploited by today?s over-spending. Then, perhaps, we might have a government that understood the legitimate limits to political power, rather than two chambers reinforcing each other?s pursuit and acquisition of it.