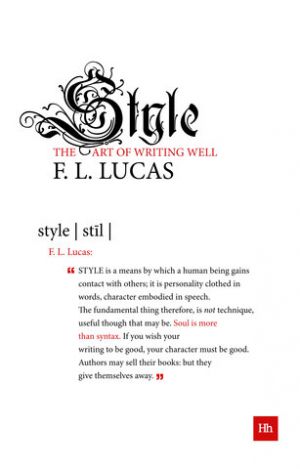 Style: The Art of Writing Well (1955) by F.L. Lucas holds the origin to those immortal words so often repeated and quoted by writing professors to their young students: ?murder your darlings,? meaning to delete those phrases most cherished by the writer who wrote them. Actually, the quote so often used by professors is not the actual intention Lucas had meant, but the purpose, in the end, is the same result. Lucas did not mean to delete the most beautiful sentences from the writing; he actually meant that bold epigrammatic statements that simply could not be proven as true and accurate should either be omitted or have an introductory phrase inserted beforehand. As example: Rice is food for the heart; should actually read, ?It might be said that? rice is food for the heart. Here is the actual quote in length:

?I have spent years saying: ?Your generalization is beautifully epigrammatic. I understand that you could not bear to leave it unwritten. But consider all these exceptions to it. You knew them. If you could not bear to kill your darling, why not introduce it with the words ?It might be said?, and then yourself point out the fatal objections? Then you could serve Beauty and Truth at once. At least you could have inserted ?possibly? or ?sometimes? into this sweeping pronouncement? (pg. 131).

This is not the only misunderstanding Lucas proves to be a fallacy.

As for Style (dedicated to Sir Charles Tennyson), Lucas?s major claim is that although he agrees with some writers who believe ?C?est que le bon style est dans le coeur? (The truth is that good style is found in the heart), style can be found, at its origin, in the writer?s character.

Lucas claims psychology is the key, found both in the reader and the writer. ?The fundamental thing,? writes Lucas, ?therefore, is not technique, useful though that may be; if a writer?s personality repels it will not avail him to eschew split infinitives, to master the difference between ?that? and ?which?, to have Fowler?s Modern English Usage by heart. Soul is more than syntax. If your readers dislike you, they will dislike what you say. Indeed, such is human nature, unless they like you they will mostly deny you even justice? (pg. 35). How true this is. For I have often seen mediocre writing gain an abundant amount of applause by readers who simply make the mistake of supplanting their own beliefs onto the writing. Writing should stand on its own merit, but, as Lucas asserts and I tend to agree, it does not. Character is vital. ?For a writer, likewise,? continues Lucas, ?such shrewder minds are always there in wait. The readers who read between the lines are the readers worth winning. But if the writer forgets them, if his mood in writing is mean or peevish or petty or vain or false, no cleverness and no technique are likely, in the end, to save him. That is why I repeat that the first thing in style is character? (pg. 39). Lucas does offer two extended examples that illustrate this point extremely well. One is a letter by Samuel Johnson to Chesterfield and the other is a letter from Coleridge to Lord Byron. Coleridge had wanted Byron to recommend some poems to Byron?s publisher (It seems the writing world hasn?t changed that much after all). In closing of this chapter on character Lucas writes, ?Naturally no fineness of character is likely to make an ungifted man write well (though I think that even this sometimes happens); but it can make a gifted one write far better? (pg. 43).

The chapters include subjects on Clarity (worth reading, but often cited in other craft books), Brevity, Urbanity and Simplicity, Humour, Good Sense, Simile and Metaphor (another one worth reading), Harmony of Prose, and various Methods of Writing. If Style starts with a bang, it certainly ends in a whimper. The section on harmony is a bit dull and focuses on word stress and the alterations a writer can make for better prose, but Lucas does offer this piece of advice in the section: ?Feeling tends to produce rhythm; and rhythm, feeling? (pg. 198). Amateur writers often lead with their heads rather than their feelings and the writing turns out flat and more like a drone than a hymn. Write with your heart; revise with your head.

The last chapter, ?Methods of Writing,? is very interesting, showing how certain writers through the ages have undertaken the craft of writing. Samuel Johnson is one writer Lucas often considers, and earlier in the book, Lucas reveals a good laugh about the writer: ?But I take shelter behind the massive bulk of Johnson,? writes Lucas, ?When Lady Macleod objected that a writer did not practise what he preaches, ?I cannot help that, madam,? was his reply. ?That does not make his book the worse?I have, all my life long, been lying till noon; yet I tell all young men, and tell them with great sincerity, that no one who does not rise early will ever do any good?? (pg. 31). So one tends to believe Lucas when in the last chapter he writes: ?One need not believe too literally in Oscar Wilde?s account of how he spent the morning putting in a comma, and the afternoon in taking it out again? (pg. 233). Lucas does have a way with words, and it is a joy to read his advice and stories of some of the most famous writers in the world.

One last quote I would like to share is one worth remembering: ?I believe,? Lucas writes, ?that a writer should try, not to be different from others, but to be himself; not to write ?originally,? but as well as he possibly can. Real originality is spontaneous? (pg. 254).

There are several dozen quotes worth sharing here, but I will simply recommend Style: The Art of Writing Well to any serious writer and for any one who teaches writing at high school or at a higher level. A very strong recommend.