Bill Jamieson: An excellent study of the century\'s stormy years 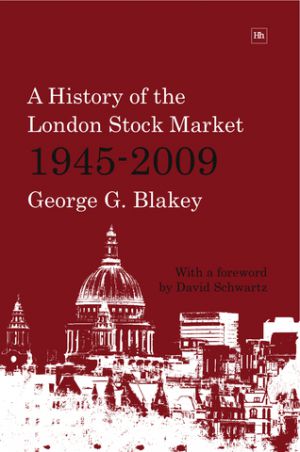 A broad post-Second World War history of the stock market should treat each year more or less equally. It is a tribute to the latest updated edition of his History of the London Stock Market that author George Blakey does not skimp on those years that seemed in retrospect uneventful while allowing the more momentous turning point years the space and care to let the dramatic narrative unfold.

The year 2008 was without question one of these. There were months that concentrated market movements that would "normally" have filled a decade. And there were days in that year that packed in events that could have occupied a year. Even that summation cannot begin to capture the Storm Force Ten intra-day movements that saw the world's major financial markets rebound and collapse several percentage points in a matter of hours.

This was the year that saw the biggest financial crisis in 80 years and the onset of a recession whose aftermath continues to shape events on a daily basis. What Blakey, a former stockbroker, has done is to provide a detailed chronicle of how seemingly isolated, unrelated "routine" business and financial news formed part of a greater picture of trauma and downfall.

Arguably the most breathtaking feature of this narrative is the extent to which financial experts and commentators were dragged kicking and screaming to a slow realisation of the magnitude of the crisis. Temporary upticks and rallies were hailed as evidence of a bottom having been reached, or a new dawn.

The collapse of Bear Stearns was seen as the event that would cauterise the crisis. Then there was the bail-out of the monoline insurers. Soon after came the US government's Troubled Assets Relief Programme. And then came Lehman Brothers...

The more telling measure of the slump in value was the FTSE 250, which lost 40 per cent - and had still further to fall. Even that does not capture the collapse in the banking sector and the 90 per cent falls suffered by Royal Bank of Scotland and HBOS, which left them reliant on massive support from the taxpayer.

No book more thoroughly deserves to be within reference reach of every fund manager, financial adviser and stockbroker. With details given of major corporate and financial events since 1945, and each year since 1966 forming a separate chapter, this is an outstanding instant refresher of what moved markets.

I had the pleasure of knowing Blakey when he was a stockbroker and market commentator in the early 1980s and neither his acute eye for detail nor his wry detachment has left him. This landmark book defines an era. And this account has a wider appeal - for students of markets, policy makers and anyone taking a serious interest in equity investment, this is a deeply cautionary tale as well as a definitive work of reference.

Certainly, for those not already convinced that stock markets are the natural field of study of behavioural finance, this is a great starting point. It leaves in no doubt how the powerful emotions of hope and fear - not arithmetic ratios - drive markets.

As for this year, it is already forming a pattern ominously similar to that of 2008. Hopes of a sustained recovery have given way to a worrying downturn in activity and sentiment. Our prospects of escaping a "double-dip recession" hang by a thread. And market optimism has been repeatedly struck down by disappointment.

On Friday, the S&P 500 index fell by 2.9 per cent. Shares in Citigroup and Bank of America were hit, with both reporting falling revenues. US consumer confidence also fell to its lowest level since August 2009. The poor results were not limited to US banks, with General Electric also down 5 per cent after reporting falling revenues. Google also worried investors, with its profits for the last three months falling short of expectations for the first time in its history. Its shares ended the day down nearly 7 per cent.