Rise and Fall of a Giant: Adrian Webster reviews a history of Dorling Kindersley 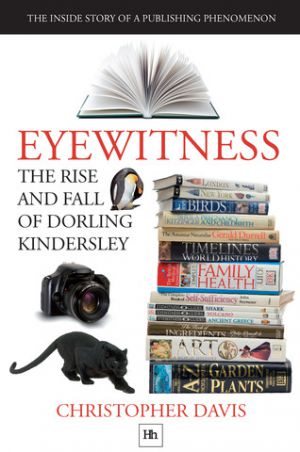 It is difficult to overstate the impact Dorling Kindersley made on the international publishing scene in the last quarter of the 20th century. A company which started as a book packager in 1974 in a backroom of Peter Kindersley\'s South London home had grown by 1999 to an international publishing giant turning over approximately £200m with a staff of more than 1,300 people. Along the way - in response to the irrepressible Kindersley\\\'s ambitions and need for cash - the company was part-owned by Readers Digest, then by Microsoft, floated in a hugely hyped and successful IPO, and finally sold in crisis to Pearson, where it is now a division of Penguin; a once mighty beast brought down by one major act of commercial insanity - printing thirteen million copies of a series of Star Wars books that sold \'only\' five million.

Christopher Davis\'s Eyewitness: The Rise and Fall of Dorling Kindersley is a rollicking good tale, and there is much here from which to learn about publishing, business and human psychology. Davis writes well, and not just by the standards of most publishing memoirs. Anecdotes include gems on sleazy hotels, the sexual appetites of authors, wine-swilling nuns, the sun-signs of Norwegian dogs and endless examples of Kindersley\\\'s eccentricities. The reader gets a very good feeling for DK the institution and the loyalty, fervour and camaraderie it engendered.

Davis, famously convivial and widely liked, was a talented editor who grew into a formidable publisher with his finger on the pulse of international demand. Internally he was also the unofficial human resources director of DK in its formative years and externally he became its leading ambassador. Which was just as well on both counts, because although Davis makes it clear that Kindersley was a very difficult man, he doesn\'t quite convey what an unpleasant experience it could be dealing with him for those both within and outside the company. He also has, perhaps, a rose-tinted view of DK as a happy band driven by purely creative ambitions. DK was a tough nut to do business with, and Davis, both publisher and the ultimate godfather of the vast sales organisation, was not always as cuddly as he looked. In its pomp, DK was a veritable war machine - a Panzer division rolling across the fields of international publishing, feared and admired in equal measure.

Davis was in the original gang which in 1974 left Mitchell Beazley, then the world\'s most foremost \'co-edition\' publisher, to help MB\'s driven art-director, Peter Kindersley, pursue his own publishing ambitions. Christopher Dorling, DK\'s co-founder, does not feature large in Davis\'s memoir. The international sales skills that he acquired under James Mitchell\\\'s tutelage were a key factor in getting DK off the ground, but his ambitions never matched those of Kindersley. Davis\'s own contribution was ultimately far more significant.

DK did not invent international co-edition publishing. The credit for this is traditionally given to George Rainbird, whose eponymous packing company in the 1960s was the first systematically to use what was as much of a business model as a creative concept. The Platonic ideal of a sucessful co-edition book is one which is desirable and saleable in a large number of language markets (preferably a minmum of, say, 12); too expensive for any one market to bear the development costs; illustrated and designed in such a way that it can be printed in all those languages with only a change of black plate; and for which an enlightened author can be found who will accept either a fee or royalties based on the original publisher\'s net receipts rather than, impracticably in the co-edition world, on published price.

Mitchell Beazley, set up in the late 1960s by refugees from Nelson, including Kindersley as art director, and cartographer-cum-salesman Dorling, took co-edition publishing to a new level with intergrated graphics and sophisticated page design: Hugh Johnson\'s World Atlas of Wine and Alex Comfort\'s The Joy of Sex were legendary co-editions from the days when Kindersley was still with MB. Kindersley claimed that he and Dorling left MB - Davis tagged along as a senior editor - because James Mitchell reneged on a promise to give them equity; Mitchell claimed an overriding need for capital. But as massive clash of egos was almost certainly the main cause, and they maintained a prickly rivalry - constantly trying to poach each other\'s authors and staff (Mitchell made at least one major play for Davis_ - until Mitchell\'s untimely death in 1988 (whereupon there was, bizarrely, a brief abortive attempt to merge the companies).

The similarities between Mitchell and Kindersley are fascinating: both had great charisma and egos to match; both were unreasonably demanding and dementing to work for; both sold part, or all, of their respective companies several times over; dealing with lieutenants and partners ruthlessly along the way; both were very successful businessmen, yet each would have described himself mainly in creative terms - designer and editor respectively. And both their empires came a cropper: MB after even more corporate alliances than DK, ended up as an imprint of Octopus; DK, after its fall from grace, as a division of Pearson. Mitchell did reasonably well along the way; Kindersley made a fortune. How did DK come to be so valuable?

The books themselves were undeniably good. The look took a while to emerge, but eventually became virtually a brand. Kindersley understood that a generation brought up on TV and video wanted highly visual presentation of information. Davis has a stab at an educational-psychological justification for the approach - but essentially DK books were pretty and the quality of the text was good enough. Although many claim that DK dumbed down reference books, Davis vigorously denies this. But DK designers did wield exceptional influence: in the first bookfair presentation of the Eyewitness Travel Guides opening times were found to be missing from all the museums and similar entries - the designer thought they spoiled the look of the page. (Davis surely never condoned the lack of an index, yet he deprives this tome of one, which is a great pity.)

However, despite the fact that DK was always thought of as a design-led company, it is the one-off, author-driven projects - one thinks of The Way Things Work, the Miriam Stoppard and Sheila Kitzinger titles, and the legendary RHS Encyclopedia of Garden Plants - which were perhaps DK\'s greatest creative successes. And one should note in passing that DK\'s two most famous series might never have got off the ground had it not been for the inspiration of its main French publishing partner-cum-rival, Pierre Marchand of Gallimard. It was Marchand, another prickly publisher with a huge ego, who persuaded DK that the photo-on-a-white-background design concept first used in The Book of Ingredients could be developed to cover all subjects, as it did in the Eyewitness series; and then - stung by French criticism that the leading children\'s series in France, which Eyewitness became, was made in Britain - pulled out of a collaboration on travel guides, forcing DK to find its own solution.

Others could and did copy the DK look, but it was the extraordinary sales machine built to impose Kindersley\'s creative vision that enabled DK to dominate the co-edition marketplace. Its hallowed bookfair stand was a fortress - the (occasionally erroneous and highly embarrassing) chucking-out of great international publishers who had no appointment was the stuff of legend. Publishers queued up to buy - not least out of pure fear of missing out on the latest great thing laid by the golden goose. Perhaps the apogee of this phenomenon was the hugely ambitious and desperately costly-to-produce CD-ROM series. The bank accounts of DK\'s top co-edition partners were comprehensively plundered to fund it. Partners dared not be left out. They coughed up, but some lost a fortune.

Even as the CD-ROM revolution stalled (when Microsoft, ironically a 26% shareholder in DK at the time, pulled its Home series), DK managed to weather the storm and continue its rapid expansion. Enough home runs were hit to pay the bills, but DK had moved into a completely different size category and had been investing hugely, not only in the CD-ROM and travel series, but also in a very ambitious international network of party-plan operations known as DK Family Library. DK was now not only publishing all its own titles in the UK and USA, but also in Germany, and had its eye on France. So, it comes as no surprise to note, as some DK-watchers did at the time, that the work-in-progress figure on the DK balance sheet was veering dangerously north well before the Star Wars calamity.

Kindersley peremptorily enforced Davis\' early retirement in the midst of the Star Wars saga (Davis\'s sin was a refusal to condone the lunatic print-runs). The company was then rapidly sold to Pearson at a very full price, making Kindersley enormously rich but leaving Pearson with a great deal of work to restore it to profitiability. To achieve this Davis was recalled to DK as publisher, but you sense his heart was not in it. He stayed long enough to get the ship back on an even keel, but this was no longer the DK he loved and he had little stomach for corporate decision-making, smart offices, reduced budgets - he belonged to more swashbuckling times.

Adrian Webster is Chairman of Websters International. He was MD of Mitchell Beazley from 1978 to 1982. Websters helped DK develop the Eyewitness Travel Guides series.

Eyewitness: The Rise and Fall of Dorling Kindersley by Christopher Davis is published by Harriman House Publishing, £12.99