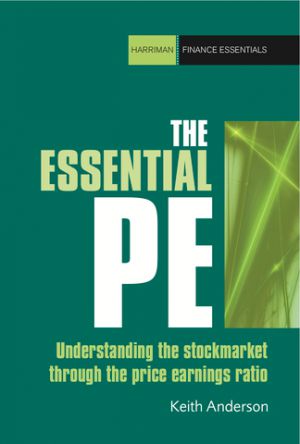 If you take today?s share price and divide it by one year of earnings per share taken from a company?s results six or more years ago it will, in general, be a more powerful predictor of future stock market returns than using this year?s earnings.

That remarkable fact reminds me how many investors take the price earnings ratio for granted. Almost all of us use it but how many have really scrutinised it? Few have built their career around the PE, but Dr Keith Anderson, a finance lecturer at the University of York, has.


Many years ago I was asked to justify my intention to publish a "whole article" on the PE ratio. I remember thinking it would be possible to write a book on it. Keith, a finance lecturer at the University of York, was asked to write that book a few years ago and I played a small part in its conception so I felt some satisfaction when, a couple of months ago, a review copy of the Essential PE arrived.

In some ways Keith?s investing journey is similar to mine. We?re both keen private investors who turned their intellectual and financial interest into a career. When we first met he was a graduate student at Reading University, and had just written a PHd thesis on improving the PE ratio. He?d developed a souped up ratio he called the Naked P/E that took as its starting point Benjamin Graham?s observation seventy years earlier that earnings averaged over many years are a more realistic estimation of a company?s earning power than a single year?s earnings.

It was a concept I quickly embraced, and Keith was, as far as we know the first person to test it on individual companies, and the first person to use it since Benjamin Graham. His Naked PE, which also took account of a company?s size and industry, was outrageously profitable and we published portfolios of Naked PE stocks on this blog until they imploded in the credit crunch.

Then we started think about how a strategy that had been successful for decades had suddenly blown up, and how the Naked PE could be improved to protect it. The F_Score had potential. It was a measure of financial strength invented by American academic Joseph Piotroski that successful weeded out weak companies and vastly improved the performance of portfolios undervalued according to another value investing ratio, price to book value. So Keith set out to test that too.

If you have followed this blog from its early years, read about long-term PE?s, Naked PE?s, Magic Formulas and F_Scores imported across time and space from America, and wondered whether they really do apply to the UK today, the econometric research has been done and now published in a book that explains the PE, its applications, its limitations, and how to improve on it. Within its 196 pages is a brief history of the PE, a tutorial showing how it?s derived from a company?s accounts, an overview of the growing academic literature, and an exposition of modern finance which challenges the notion that the PE means anything at all.

As Keith shows, it?s modern finance that has a case to answer, when a portfolio of low PE stocks, selected according to the most basic and least impressive form of the ratio, generates a return of ten times the market compounded over 40 years.

He debunks bogus developments in the PE, like the popular PEG, an attempt to factor earnings growth into the PE (past earnings growth tells us nothing about future earning growth, he demonstrates), validates what works, and suggests what might work even better.

Using earnings from six years ago works better than using the latest earnings. It?s one of a list of unanswered question that ends Keith?s book. You might think ending a book with unanswered questions is an odd thing to do, books like this are supposed to give answers, but if it?s answers you want there are plenty, and the unanswered questions are opportunities for further research.

One opportunity, focusing an operational earnings rather than accounting earnings, may well be worthy of another book. Another, averaging earnings for more than ten years, boggles the mind but has a kind of logic to it. If old earnings are more relevant than current ones, how far back should you go?

I?m off for a couple of weeks, so it seems fitting to end with a book review. The Essential PE wouldn?t be my recommended beach read, more likely a candidate for when you return refreshed, and open to new possibilities, but it?s very easy to read and often witty so if you?re hard-core, go for it. Another suggestion: Mr China gripped me from start to finish. Adventure Capitalist meats Barbarians at the Gate, Tim Clissold?s memoir investing in an awakening China is right up there with the great finance stories. Here?s a review from the archive of The Economist.