City Spy: In a nutshell, the EU is too wordy 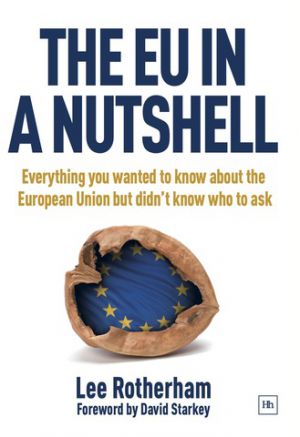 After hosting the ?first keynote speech? by Liam Fox since the former defence secretary left the Cabinet, the TaxPayers? Alliance is keeping up its attack on the EU.

Fox was talking about the UK?s relationship with the EU at the beginning of the month but the alliance has now published a book by Lee Rotherham entitled The EU in a Nutshell. It is inspired by the fact that there are 271 words in the Gettysburg Address, 313 words in the Ten Commandments but that the Commission Regulation (EC) No 1284/2002 laying down the marketing size for hazelnuts in the shell runs to 2509.

* Labour peer Lord Lipsey?s memoirs include an account of his board membership in the Nineties of the Personal Investment Authority, the Financial Services Authority?s predecessor for regulating personal financial products. He tried to persuade the then Labour opposition not to abolish the PIA. ?I was sent on a mission to Alistair Darling, then a shadow Treasury spokesman, to talk him out of it in favour of a ?twin peaks? solution, a retail regulator and a separate prudential regulator,? says Lipsey. ? I failed miserably?.

Now, however, the structure which Labour rejected is being restored in the wake of the pig?s ear the FSA made of the banking crisis. ?We were right,? he says, ?but 15 years too soon.?

* Channel 4 newsreader Jon Snow and Labour peer Lord Hollick of Notting Hill were spotted boogying away at Jools Holland?s performance at Somerset House last night to mark the finale of BT?s River of Music weekend. Also in attendance were British Airways chairman Sir Martin Broughton and Sir Charles Allen, taking a break from his duties as mayor of the Olympic athletes? village, along with one of his deputies, swimmer Duncan Goodhew.

Final salary, cellars: What?s blue in that?
Where are you able to go these days for a ?competitive? wage and final-salary pension scheme?

Not the City or industry clearly. But ancient seats of academe still seem to be exempt from such vulgar constraints.

Indeed, Cambridge?s oldest college, Peterhouse (founded in 1284), is at present seeking a bursar to help bring its finances into the 21st century for which a final salary is mentioned as the most important part of the remuneration after wage.

The college has maintained an enviable obscurity throughout its more than 700 years.

But recently it has recently come under the glare of publicity as the college which Tom Sharpe satirised in his novel Porterhouse Blue. It was also Michael Portillo?s alma mater and when he acknowledged that he had had homosexual relations it was said of Peterhouse that ?if you weren?t gay when you arrived, you were gay by the time you left?. Funnily enough, it was the last Cambridge all-male college to admit the fairer sex (in October 1988 to be precise).

Whether the Bursar will be required to keep the college in the public eye or to retire from it is uncertain.

But one emolument not mentioned is the cellar ? the lucky candidate will become a Fellow of the college and ?other benefits? of the job which have been mentioned include some fine top table dining.

Oh and tips for applicants ? it is Peterhouse, plain and simple. No College afterwards. After all it was the first?

Wiggins reaches for the Sky
There was a small cameo for BSkyB boss Jeremy Darroch in the ITV1 coverage of Bradley Wiggins? triumphant Tour de France victory yesterday. Darroch, whose decision to sink money into British cycling played no small part in the success, was briefly pictured in the Team Sky car cheering with delight as Wiggins? win was confirmed. Also cheering will have been ITV, which was bound to have had a Sunday afternoon ratings boost. Sky, still a 7.5% shareholder in ITV, won?t have minded that either.

Raj networks a way to No 1 position
What is the best way for an entrepreneur to meet potential investors and raise money?

Networking seems to be the answer according to Raj Ramanandi. The founder of new angel investment organisation #1seed has listed his top 10 tips and City Spy thought readers might benefit from reading, (and inwardly digesting) it:

Big conferences;
Large networking events;
Introductions;
Demo days;
Private-members? clubs;
Social events;
Events with journalists and bloggers;
LinkedIn; Making friends;
and New, novel events.
If nothing else, it sounds like a good way to spend a lot of money on coffee and beers.

* Europe is in the doldrums, so Fidelity?s European Values investment trust is hardly one for widows and orphans: shares are back at their 2005 level. Only two directors have watched its rise and fall during the past decade. One is Simon Fraser who also happens to be a director of Barclays. The other director is Simon Duckworth whose impressive list of board positions includes chairman of the National Olympics Security Oversight Group and chairman of the City of London Police Authority. At least his not-so-valuable European trust has not taken a hit on G4S.