Ozren Cvjetic is an economist with a BA from Seattle University and a Harvard University-trained mathematician, with a background in European Union regulatory finance and emerging market central banks. He is a member of the G20 private sector preparatory group, sponsored by the Financial Stability Board, and an expert on the Legal Entity Identifier. As a member of this group, he co-authored a major report on LEI operations which was adopted at the G20 summit in January 2013. Mr. Cvjetic is a founder and academic board member of the Masters in Science in Global Financial Data Management at the European Centre for Peace and Development, established by the UN University for Peace. He is also on the board of the European Heart Network’s member foundation, the Foundation of Health and Heart, from Bosnia-Herzegovina. As an avant-garde filmmaker, he produced two feature films in 2008 and 2016. Two of his short films were presented at the Festival de Cannes in 2007 and 2015. His feature film, Americana (Love Poem), premiered at the 23rd Sarajevo film festival in 2017. 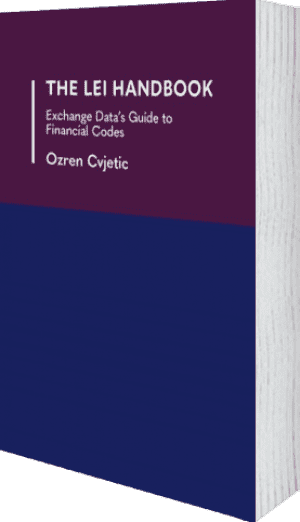 The LEI Handbook
From £75