Slobodan Jovanovic is an experienced trader of non-ferrous and precious metals. Born and educated in Belgrade, his business career started in 1980 at Invest Import, one of the largest export and import companies in former Yugoslavia. He was the first to conclude "Trepca" silver bullions export deals with Philipp Brothers of London, and Intermercur in Zurich. During this period he also became very familiar with hedging concepts and strategies and developed a keen interest in the field of derivatives trading and hedging concepts.

In 1995 he moved to Athens to organise a sales network for another Serbian company and the following year he joined the Mytilineos group of companies, one of the largest non-ferrous traders in South-East Europe. He was promoted and helped conclude the deal with RHMK "Trepca," which was the largest foreign investment in Serbia at that time. In the same period he paved the way for yet another big investment scheme - the strategic alliance between Mytilineos Co. and Bor that resulted in the $1 billion "General Cooperation Agreement" deal. In terms of value, scope and duration this deal dwarfed any previous investment of a single private company in South-East Europe and was immediately labelled by the press as "The Deal of the Century".

Additionally, Jovanovic"s work has included the execution of complex business activities related primarily to copper trading, concentrates tolling and cathodes exports. In the course of his professional career he traded non-ferrous metals with some of the most recognised companiesin that field, such as Trafigura, Mark Rich, Glencore, Rusal, Umicore and Norddeutschen Affineire (now Aurubis). Jovanovic became a freelance hedging instructor in 2009. He runs coordination and consultation with intermediaries mainly engaged in non-ferrous metals and the cable industry interested in implementing hedging solutions in their day-to-day operations. Presently, he is engaged in designing short educational seminars on derivatives markets and hedging concepts in real-time context for the Serbian Chamber of Commerce.

This is his first book on derivatives trading, commodities futures and options strategies seen from the trader"s viewpoint. 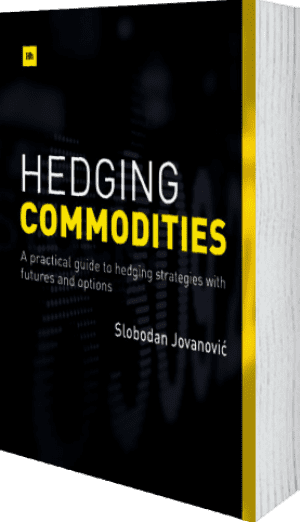