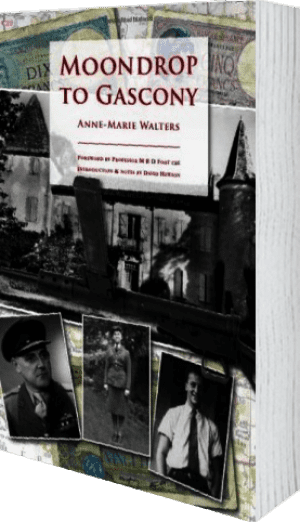 On a cold, moonlit night in January 1944, Anne-Marie Walters, just 20 years old, parachuted into southwest France to work with the Resistance in preparation for the long-awaited Allied invasion. The daughter of a British father and a French mother, she was to act as a courier for George Starr, head of the WHEELWRIGHT circuit of SOE. Over the next seven months Anne-Marie criss-crossed the region, carrying messages, delivering explosives, arranging the escape of downed airmen and receiving parachute drops of arms and personnel at dead of night - living in constant fear of capture and torture by the Gestapo. Then, on the very eve of liberation, she was sent off on foot over the Pyrenees to Spain, carrying urgent despatches for London.

Anne-Marie Walters wrote Moondrop to Gascony immediately after the war, while the events were still vivid in her mind. It is a tale of high adventure, comradeship and kindness, of betrayals and appalling atrocities, and of the often unremarked courage of many ordinary French men and women who risked their lives to help drive German armies from French soil. And through it all shines Anne-Marie's quiet courage, a keen sense humour and, above all, her pure zest for life.

For this new edition, David Hewson, a former Regular Army Officer and much interested in military history, adds biographical details for the main characters, identifies the real people behind the pseudonyms and provides background notes. He also reveals what happened to Anne-Marie at the end of the war.

"One of the outstanding surveys of the real life of a secret agent." - Professor M R D Foot

"One of the very first accounts of SOE's wartime work and remains vivid and fresh." - Simon Mawer, author of "Tightrope", writing in the Wall Street Journal

This fascinating autobiographical account of a young female special ops agent during World War II tells the tale of 20-year-old Anne-Marie Walters, the daughter of a British father and a French ...