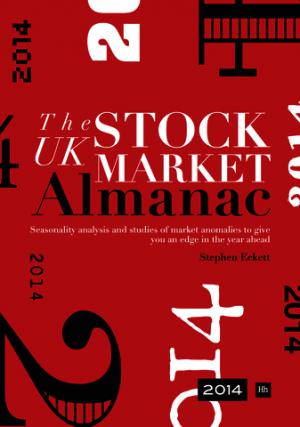 Almanacs are ancient publications, traditionally associated with providing detailed facts and figures on a particular subject. What I also associate them with is their focus on advising readers on how to plan their affairs given predictions of the year ahead. For example, the Old Farmer's Almanac is a US reference book that contains weather forecasts which help farmers to plan their year. In the same vein, the 2014 Stock Market Almanac is a detailed reference guide on the markets, also packed with predictions and advice on how investors can best plan for 2014.

Stephen Eckett read mathematics at London University and then joined Baring Securities on the Japanese equities and warrants desk. After setting up a futures operation for Barings in Hong Kong, he joined the capital markets division of Bankers Trust and organised the first listing of an index warrant in Asia. He then moved to Tokyo to set up a derivatives desk for S.G Warburg Securities. In 1993 he founded Numa Financial Systems, a training and systems consultancy company specialising in derivatives.

The Stock Market Almanac is part reference book, part diary, which also attempts to provide investors with a detailed review of how the financial markets show trends and anomalies at different times of the year and when a range of events occur. More importantly, it also provides strategies on how to take advantage of these.

The book is separated into three main sections, with the core text focused upon the weekly goings on in the investment world. Divided into 52 sections, one for each week of the year, the book is packed with statistics and information on what is expected to happen that week in 2014. More interestingly, there is also an accompanying stock market story/review for every week. These stories attempt to identify patterns & anomalies which may crop up at that time of year - based on history - and suggest ways in which they can potentially be exploited.

For example, the pages for the first week of January provide details on how frequently the FTSE 100 has risen during the first month of the year since its establishment in 1984 (59% of the time) and what its average return has been during the month (0.5%). Details on particular types of stock and assets are also given. For example, small caps have traditionally outperformed blue-chips by an average of 3.7 percentage points in the first month of the year. According to Eckett, investors watching the markets closely in the New Year should note that the direction of the market for the whole year is often the same as seen in the first five days of January.

Incidentally, December has traditionally shown to be the strongest month of the year, rising 86% of the time since 1984. But attention seeing stock market commentators take note, the FTSE 100 (as I write) would have to rise by around 6.1% by the end of the year to reach that magic 7,000 figure, well ahead of the average December gain of 2.5%.

Of particular interest to investors next year could be the author's analysis of how the FIFA World Cup affects stock markets. In terms of host countries it seems that there is no real effect on the home stock market in the year of the competition. For example, South Africa saw its stock market surge by around 30% in 2010, while Japan in 2002 saw falls of around 20%. Data on the effect of winning the World Cup also seems inconclusive, with Spain seeing a modest rise after winning in 2010 but France seeing a c.20% fall in 1998. Either way, England fans will probably not care given their lowly chances in Rio next year.

More noteworthy, Eckett's data suggests that we might be in for modest gains in 2014, the Chinese year of the horse, which starts on 10th February. According to the author's data, horse years have historically averaged a gain of around 6/7%, which suggests more of a canter for the markets than a gallop.

The rest of the book provides detailed statistics on markets and company performance over time, including more anomalies, trends and market characteristics. The final Reference section includes information on stock indices, how the markets work and a very interesting section on how the original constituents of the old FT 30 index have performed over the decades.

Of course, when analysing data from a timing or "event" point of view there are many contradictions which can come up. For example, according to the Chinese year data above we are set for decent gains in 2014. But apply Eckett's "Wimbledon Indicator" to the markets and we are looking at a big sell off.

After reading this I attempted a similar analysis based on sport. My football team, Bradford City, has been promoted four times in my lifetime - in 1985, 1996, 1999 and in last year's glorious 2013 season. But what has been the effect on the stock market?

It is of course nonsense that the results of a sporting event can predict the performance of the stock market. A miniscule event in the overall scheme of things can not predict how a massively complex system, with billions of factors working together, can perform. Eckett's Wimbledon based findings are simply a result of selective data mining combined with a nice story.

To some relief Eckett recognises this fact and quotes the well known phrase "correlation is not causation", something which every reader of the book should bear in mind while reading it. Incidentally, investors who used the "Bradford City effect" following the team's promotion on 18th May this year have seen a 1.9% fall in the FTSE 100.

Overall the 2014 Stock Market Almanac is an entertaining, informative and useful book. Often delving into the fantastical and then back to detailed scientific studies, it is worthy of inclusion in the Christmas stocking of any investor.