What Businesses Can Learn From Political Campaigns 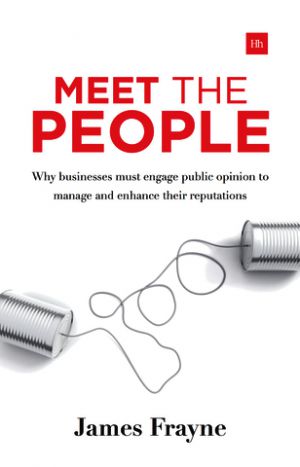 Communication used to be top-down: serious journalists with economics
and politics degrees wrote informed articles and readers learned from them. All that has changed with the populist takeover of the internet.
In Meet the People, communications consultant James Frayne examines how business people can work with our new reality, where information is shared by all, not accepted from experts ? advice on personal finance can come from moneysavingexpert. com, car sales from carzone. ie and off-centre news from broadsheet.ie (though the examples he gives are more English-centred).
Do a search on any company, he advises. Instead of the carefully managed public persona of pre-internet days, the conversation is now run by the public, who debate the morality of companies? behaviour openly online.
Frayne starts his story with a PR disaster that happened to snack chain Subway: a customer bought one of their vaunted ?footlong? sandwiches, measured it and it came up 11 inches ? and in the succeeding media storm, further sambos failed to measure up. Subway made a commitment that all their ?footlong? sandwiches would actually be a foot long.
Instead of the scattergun advertising we are used to ? billboards, newspapers ? he advises companies to use the model of US political campaigns, which ?micro- target? their audience, using psychological questionnaires to find their ideal audience and ignore the others. ?Great campaigns are expert at shifting public opinion,? he writes.
Political campaigns? use of micro targeting to segment the population ?not only helps campaigns move certain groups of voters but improves their efficiency too?, like the Clinton presidential campaign, which ?using a Myers?Briggs personality test... sought
to classify the electorate by personality traits: extroversion versus introversion, sensing versus intuition, and judging versus perceiving?, and probed questions as personal as taste in TV shows and sports, and people?s views on others? life choices.
?This operation allowed the Clinton campaign to develop a phenomenal understanding of the electorate, and, above all, crucial swing voters,? he writes. ?They developed a sense for which issues they should focus on and also how they should pitch their approach to these issues. They also got a sense for how they should appeal to voters because they understood what was actually behind voters? view of the world.?
Frayne gives a couple of for- instances on how this method can be used: one of these a bank trying to subvert the public rage at banks generally, and at the high salaries of bank executives. After detailed research, he writes, a bank might ?focus on starting a new conversation on their improved customer service and policies on public and small business lending? ? ignoring those who?ll never listen to them and concentrating on their customer base.
He quotes social media expert Dave Kerpen on targeting customers: ?For example, instead of a beer company searching for men aged 21 to 34, the company could easily find those 21- to 23-year-old males in key geographic markets who list ?drinking?, ?partying? or ?bars? as interests on their profiles.?
Frayne?s book dissects the approach to developing and disseminating messages, showing how cognitive and social sciences have taught us to make messages appeal on an emotional level and the implications of these factors. He develops this theme with informed introductions and plenty of science. Whether you find his ideas Orwellian or irresistible, Meet the People is a fascinating, slightly chilling, read.