How Martyn Dawes built a £23m coffee company in 10 years 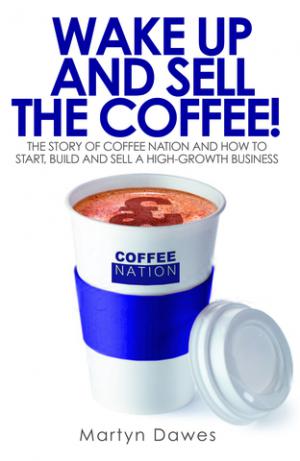 Real Business catches up with Martyn Dawes to discuss how he built Coffee Nation before selling it for £23m in less than 10 years.

Martyn Dawes admits that when he founded Coffee Nation he wasn?t quite on the right track. Having identified a gap in the market between instant coffee out of a jar and increasingly popular espresso bars, he set about installing coffee vending machines in service stations and other retailers.

But rather than the gourmet bean-to-cup machines we?re used to seeing now, the company began life offering low-value, low-quality instant coffee and powdered milk.
Business was steady but Dawes had trouble attracting angel investors to make the business grow.

?One thing I feel really grateful for in my own journey was going through that at an early stage,? he says. ?I nearly gave up, I nearly ran out of money, I was technically insolvent at one point, but I managed to hang in there to find the X Factor that would make it work.?

The eureka moment came when he decided to switch the instant machines for ones using gourmet coffee and fresh milk.

Despite an increase in price per cup, sales began to grow. Suddenly investors began to take note.

?I had been banging my head against a brick wall trying to raise capital until that point,? he says. ?Why? Because I?d got a shit business. It was a dud, it was a duck. But with that switch of the product it suddenly became easier. Raising money isn?t difficult if you?ve got something that works.?

Dawes?s new book, Wake Up and Sell the Coffee, meticulously details every aspect of his journey growing Coffee Nation. He hopes it will help others following in his footsteps to avoid making the same mistakes.

?A lot of people continue to make the same mistakes that I made at the start. Starting a business is like having a child. You don?t know what you don?t know. It?s exciting but it?s a very precarious path,? he says.

A key part of navigating this path is research, he says.

?Do the homework upfront. Test, test, test and test but spend very little money,? he adds. ?Spend a little to learn a lot. Don?t be so focused on building a business before you even know you?ve got a business.?

Understanding where your business is and where it?s going can be invaluable for everything from attracting staff to convincing investors and approaching potential partners, because it gives you the confidence to put together a killer pitch.

For instance, Dawes was able to attract Coffee Nation?s operations director from a good career with a large company because he had a compelling message.

?When we met I was able to show him how the machines were, the results from the change to gourmet coffee, the positive reactions to the [feedback] helpline, that we had big retailers on board.

?What he experienced was a guy that was passionate. It was based on facts, evidence and what I had to show. That combination and potentially a large marketplace is pretty compelling.?

?Most people don?t get out of bed every Monday morning excited about what they?re going to do. So if you can give that to people it?s really important ? more important than money,? Dawes says.

Confidence in the business model also proved to be a big asset when Dawes was approaching retail partners for Coffee Nation. The business plan relied heavily on cooperation with petrol stations and other retailers such as Tesco, so being able to convince these people that the business had a worthwhile offering was key to its success.

?There?s a huge difference between selling a product and having something interesting to say,? he says. ?There?s so much noise out there that you?ve got to be able to say something different.?

He adds that it?s best to approach CEOs or at least other directors, rather than buyers, because they have the authority to do things more innovatively.

Entrepreneurs who have gone through this process often have conflicting opinions, but Dawes speaks very highly of sense of discipline and momentum the investors brought to the business.

Dawes and his private equity partners sold Coffee Nation for £23m in 2008.

He says it's crucial to begin planning your exit way in advance ? several years if possible. You need to consider who you might be selling to, what your investors want, how much you can make and whether you want to stay on as a director.
Something else entrepreneurs can tend to overlook is what to do after selling up.

?You?re usually attached to your baby,? Dawes says. ?There can often be a post-exit vacuum for entrepreneurs.?

He himself now works as a mentor helping entrepreneurs to take their growing businesses to the next level.

He says that whilst there's plenty of advice out there for starting a business, we need to focus more on going for growth.

?We need to get away from the startup mentality and think about what happens later,? he says. ?Focusing on startups is great, we need them. But then it?s about how do we go from the startup to the growing business.

?And if we get things wrong at the beginning then it becomes far more unlikely that you?re going to succeed.?