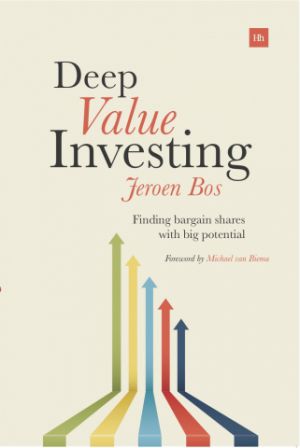 Jeroen Bos has more than twenty years of investment experience and is one of the premier deep value investors in Europe. He worked as a scout for Peter Cundill in the London market and authored Deep Value Investing: Finding bargain shares with big potential, published in 2013.

Jeroen currently manages the Church House Deep Value Investments Fund, a small-cap fund that looks for unloved companies priced at a discount to their liquid assets. The fund is largely UK weighted and has a bias to the service sectors.

Jeroen was kind enough to answer some questions for ValueWalk about his investment style and how value investing has changed over the years.

Rupert Hargreaves: Do you think there?s a contrast between value investors in Europe and the US? Value as a strategy isn?t as popular in Europe as it is in the US.

Jeroen Bos: Yes, it is much more popular in the US than in Europe, the UK is an exception but only just. I think in Europe there?s a different mentality. European?s are only interested in this kind of investing in hindsight, once the opportunity has been presented and disappeared. We?re [the European?s] not experienced in actual value investing, we take a look at the positive historic data and say ?yes this is a great style and strategy? but then, we become distracted by the media and the growth stories, which are currently doing the rounds, and then we forget about value.

RH: You?ve worked with some of the great value investors over the years, including Peter Cundill and Walter Schloss. Do you have any great nuggets of advice from these investors that you can pass on?

JB: Yes, Peter Cundill would always travel at the end of every year to visit the country that had the worst performing stock market for the year because that?s where the bargains would be. I think that?s a very smart way of looking for bargains. If you go where there?s trouble, that?s where you?ll find them.

RH: Peter Cundill clearly wasn?t afraid of investing overseas but many value investors struggle to invest outside their home countries for a variety of reasons. What?s your view on international value investing?

JB: Well, Walter Schloss never invested outside of the US. He didn?t trust the regulators in other markets, so he stayed well away. He never really trusted the figures he looked at, and couldn?t figure out his legal protection as an investor in many markets. And that?s why he stayed away.

I tend to stay away because I?m not sure how well I?m protected in various markets. You can find plenty of bargains overseas, but I?m not sure how well my assets would be protected. Overnight regulatory changes can alter the market entirely. So I tend not to invest aggressively in overseas markets. That said, I?ve been investing in Japan recently. There are plenty of opportunities there. What makes it fascinating to invest there is that I think the regulatory environment is quite good. Also, the companies you tend to find are usually much bigger than you?d find elsewhere. Most pay dividends and are profitable.

JB: Yes exactly. I remember many years ago Peter Cundill traveled there a lot. He had a big exposure there, but he became very frustrated in the period of the early 80?s because the market wasn?t reacting to the value on offer.

RH: Japan has always been a great place to find net-nets?

JB: Yes but the problem with net-nets has always been picking the ones that are going to outperform. Statistically, the numbers show that value investing and net-nets investing works, but you need to have a catalyst. The trick is knowing what will make the stock move. And if you have a weak regulatory environment, it won?t matter how cheap the stock is, the share price will never react ? investors will just avoid the company. So you have to be quite careful investing overseas.

JB: I think there are several reasons. Firstly, I think value investing is painted as being quite boring, like watching paint dry. You make these investments in companies that are going through a difficult period and these things take time to work out, which takes patience. It?s completely against the trading mentality that most of the media portray. Value investing does not fit the casino style, get-rich-quick profile many investors desire. I think that the whole financial industry is geared against the value style. From a commission-generating income perspective value investing is useless, trading is much more subdued in value investing than in growth oriented investing.

There?s plenty of statistical evidence supporting value investing, that it tends to work extremely well over the long-term. But there are periods when value underperforms, and these periods are enough for investors to abandon the strategy and start following something else again ? despite the overwhelming amount of evidence, which shows that value is the best strategy to follow over the long-term.

RH: And lastly, what has been your most notable mistake over the years?

JB: There have been many. I think one of the greatest things I?ve learnt is to pay attention to debt. As you noted at the beginning, on the whole, these companies tend to be pretty cyclical and going into a downturn with a balance sheet full of debt brings a lot of pain and tears down the road. So that?s something to be extremely careful of.

RH: Stay away from indebted companies?

JB: It does depend on where you are in the cycle, though. If earnings start to recover, and things are starting to pick up then that?s fine, but when you?re heading into a downturn. Take Glencore for example. Gearing helped them fantastically when the commodity markets were favorable but when things started to turn sour, cracks started to appear. You need to know at which point of the cycle you are, to determine if debt is going to be earnings enhancing, or if it?s going to become a problem for the company.

If debt does become