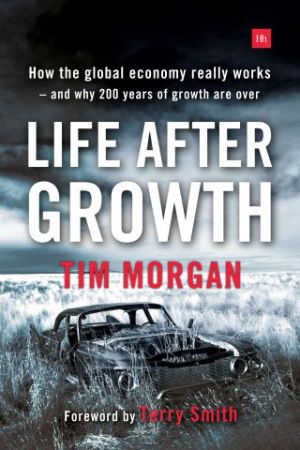 Life After Growth's author Tim Morgan is a popular but controversial figure within the investment industry, and is famous for frequently voicing views against the general market consensus and having built up a reputation for being a bit of a doom-monger. Some of his work has been so pessimistic that he has earned the nicknames "Dr. Gloom" and "Terrifying Tim" from a number of newspapers.

Cambridge educated Morgan is an energy industry and economics specialist, having worked at investment house UBS Drew Phillips as an oil analyst and then as Head of Research at Tullett Prebon from 2009 to 2013. He has often worked with legendary fund manager Terry Smith, who provides the foreword to this book. Some of Morgan's more popular published work include the Essentials Index, an alternative inflation report which attempts to calculate the real cost of living for households, and Project Armageddon, a critique of the debt laden UK economy. He also runs the popular blog https://surplusenergyeconomics. wordpress.com.

The basic premise of Life After Growth, this being the 2nd edition of the book, is that after seeing over 200 years of growth in the global economy we are now experiencing, or at least heading for, a period of stagnation. In other words, growth, and the increasing wealth and prosperity that comes with it, is over. The author argues that while positive growth figures are still being reported by national statistics offices, real economic growth has ceased and could even be shrinking.

Going back to the turn of the century, the years before the Great Financial Crisis of 2008/09 did show strong economic growth. But this was mainly driven by debt fuelled consumption and was not real growth at all, merely the spending of borrowed money. If an individual spends £10,000 just because they have borrowed it they aren't better off – in fact they are worse off because they will have to pay back interest on the debt.

On a global basis, between 2000 and 2007 the world's total debt increased by $55 trillion but GDP only increased by$17billion.Ifwestripoutinter-bank debts then that means each dollar of growth cost $2.20 in new debt. Hardly a good plan for a stable economy, hence the global financial meltdown.

In order to prevent the crisis turning into a total collapse, governments around the world then implemented a range of policy measures including the bailing out of banks, injecting cash into the economy in the form of quantitative easing and reducing interest rates to near zero so that the huge debts became more affordable. But it gets worse. Between 2007 and 2014 global debt grew by a further $49 trillion, with GDP only increasing by $1 for every $2.90 borrowed.

As a result of these government actions we are now in a world with enormous and growing debts, loose monetary policy, artificially inflated markets for assets such as bonds and property, and zero interest rates. But Morgan believes that these features are the symptoms of stagnating economic growth, not its cause.

Instead, he believes that the reason for the lack of real growth is the rising cost of energy, with energy having acted as the primary driver of population and output growth over the past 200 years.
But "cost" of energy doesn't refer to how much your gas and electricity bill is. Instead, Morgan uses the concept of energy return on energy invested (EROEI). All methods of energy production, such as drilling for oil or manufacturing solar panels, use energy themselves. So EROEI is a ratio which measures how much energy is gained for each unit of energy which is used in its production, or in other words, what you get out from what you put in.

So where is the link between the cost of energy and economic growth?

As mentioned above, Morgan is known for being a controversial author and he doesn't do anything to jeopardise that reputation in this book. In it he introduces a new way of looking at the economy, which he splits into two parts. Firstly we have the "real" economy, which includes the goods, services, resources and labour which we are all familiar with. Then we have the financial economy, which involves money and finance.

Back to energy. Morgan's core concept is that the "real" part of the economy is and always has been a function of surplus energy. Energy in a financial markets sense is often thought to be things like oil, gas, coal, electricity and so on. But it can include many other forms, such as human labour and the food we eat in order to deliver that labour.

Back in the early days of man there was no surplus energy to enjoy – a hunter gatherer would consume all the food he found in order to provide energy to fuel the search for his next meal. But as agricultural societies developed surpluses began to be created as food production became more efficient. For argument's sake, let's say what previously took a week to achieve before agriculture was developed could now be done in six days, leaving one day of surplus human labour (or energy) to be spent on other things such as building a house, inventing a new machine or learning to play the lute. Hence, surplus energy creates prosperity and real growth. The industrial revolution of the 18th century increased this surplus massively as the invention of the heat engine enabled the exploitation of fossil fuels for use in machines which were much more efficient (in an energy sense) than human labour.

But we are now at a stage in the real economy where huge surpluses can no longer be maintained.
The cost of fossil fuels, for example, ac- cording to Morgan, has been rising "inexorably" for years. Gone are the days when huge oil fields could be found in the Middle East and cheaply exploited, with most discoveries nowadays tending to be small, and difficult to access and exploit, causing the EROEI to plum- met. He estimates that oil-fields discovered in the 1930s provided at least 100 units of extracted energy for every one consumed in their discovery, but that the global average EROEI could fall to as low as 10:1 by 2010.

So higher costs equal lower surpluses and thus lower real economic growth. And this could be disastrous for life as we know it. Morgan warns that in a low EROEI economy, with more energy being reinvested in energy extraction, there will be less for not only discretionary activities such as entertainment but also for essential services such as healthcare and food production. He further warns that if EROEI falls materially then our consumerist way of life is over and societies could even be taken back to the pre-industrial age!

Is there life after growth?

The first three parts of this book reveal a potentially dismal future for humanity. But Part IV suggests that all is not lost and it could be possible for the real economy to be stabilised, albeit at much lower levels of surplus energy than we have been used to in the past.

Morgan advocates the development of energy sources which provide the best available returns, such as solar power, onshore wind and waste heat extraction, and warns against what he sees as less viable alternatives such as biofuels and shale gas. But even if these are successful, he thinks that the biggest challenge of all will be the acceptance, forced or not, of an inevitable shift away from a lifestyle based on ever increasing consumption. Enjoy it while you can!