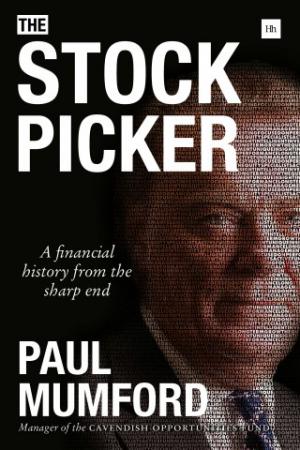 Paul Mumford – fund manager at Cavendish Asset Management – is different to the rest, and it’s clear to see from the book he’s penned that he’s as focussed on his personal life as making money, says SAFI THIND.

AN ANTIC DISPOSITION – the feigned madness and irrationality – that Hamlet assumes when setting up the king has a disconcertingly familiar ring to it for stock market investors. Madness and irrationality are never far away from the investment world as markets rise and fall with no rhyme nor reason. Making a career out of predicting stock movements is perhaps a fool’s errand. Yet still they try. Paul Mumford, fund manager at Cavendish Asset Management, has been at it for over 50 years. His successes and failures are recounted in a book he has just had published called The Stock Picker. Unlike many finance books this is not a straight investment text. The book takes in his love of horse racing, music (Little Richard, Jerry Lee Lewis and Chuck Berry), the undistinguished school career and a irtation with painting before delving into his investment life. He penned the book – which is all his own work – as a memoir for his three daughters.

“I never dreamt of writing a book until I got asked to do one,” he says. “They wanted me to do a textbook but once I did the first chapter and sent it to the publisher I got quite interested in it and thought about writing something wider and more personal, different to most.”

Mumford is not like many investors out there. This I witness as I turn up at his of office – located in the outer reaches of west London, by Hanger Lane roundabout, far from the glitz of Mayfair and the bellicose heart of the City – where he answers the door himself and offers me a coffee, which he makes himself. There’s an unobtrusive manner about him – the kerchief in his pocket, the hair somewhat slicked back, the slightly stooping six-foot plus gait, the weathered face which has all his 50-plus years experience within it and which gives him the air of a Victorian clerk or an old-34 world City gent. In his book he presents a colourful record of the changes in the investing world over the past half a century, documenting the growth of the ‘equity cult’ and the various crashes that have shocked the market during that time. It is a hefty weight of experience that has shaped his investment philosophy.

Mumford’s start in investing was fairly modest. After leaving school having failed his A levels, he joined stockbroking firm Norris Oakley Bros in 1963 before moving to R Nivison stockbrokers from where
he took the leap into fund management, establishing Glenfriars Investment Opportunities fund in 1988. In 1994 he joined Cavendish and the fund was renamed the Cavendish Opportunities fund. He currently manages £246m of Cavendish’s overall £1.2bn assets as head of the Cavendish Opportunities, Select and AIM funds. He has a specialisation in the smaller companies that tend to by under the radar of the larger firms.

“The AIM fund assets are around £35m so my initial investment will be £500,000 or £600,000, meaning I can go down to a much smaller company where a bigger rm would look to invest £50m which would mean it was almost buying the entire company,” he says.

The small cap focus and the relatively small size of the funds that he manages allow him to stand out from the rest. It also makes him something of a brokers’ favourite. He describes how brokers will give him good service for his repeat business, an affair which he likens to “feeding sardines to the penguins.”

SEEKING INSPIRATION
He says he learnt to always keep his eyes open for new ideas which come “from all over the place”. Tracking company news, following research recommendations and getting an insight into particular sectors can be rewarding. But some of the best intuitions come from chance encounters. One such occurred when he went to the vet to get his kitten spayed in 2004.

“I asked then when they would take the stitches out and they replied we don’t need to, we use superglue,” he explains. “From that I found the superglue company, which also did advanced bandaging, and invested.”

He then bought the company – Advanced Medical Solutions – at a price of 10p per share. It is now worth 217p.

Mumford is at heart a contrarian investor. He will often buy shares which other people are not keen on and particularly so in falling markets. As Mumford explains, during crises the market overreacts and people tend to assume a certain fear-driven madness just at the time when opportunities are greatest. The idea is to always view things looking forward not looking back. But it takes some courage to see this through in practise.

“I have a countercyclical view,” he says. “When a share, market or commodity is moving down you get to a point where people don’t believe it and get scared of the thing. The time to sell is when everyone is complacent. And the time to really buy is when people are panicking out of the market. People sell when the P/E is at seven times but will buy when it’s at 30 – to me that is absolutely crazy.”

The UK stock market crash of 1973 helped him gain experience of buying in bear markets. He has taken this and used it in many instances since. Last year, for example, when oil went below 30 cents a barrel, he started buying oil companies when most were selling. It paid off – his portfolio of oil stocks is up 26% this year. He also talks with enthusiasm about buying banks and housebuilders in 2008 “when they were completely on their knees – the perfect time to acquire them at a decent value.” Some of those particular ideas were prompted by broker advice, but not necessarily the right way.

“A broker came to me and said you have to go short a stock of Taylor Wimpey,” says Mumford. “At the time the shares were 24p and the asset value was 60p and they were on the verge of selling North American interests which would help to degear it. I bought shares on the notion that if they reach asset value I will make money.”

He eventually sold the stock for 107p in one fund and 197p in another – an example of not taking “idiotic” advice. He says he doesn’t use analysts in general – “they’re usually talking up their own market.” On the other hand sales contacts at broker firms – “the penguins” – can be important.

“They act as a filter,” he says. “A lot of sales people will go against house view and put forward the best ideas. If the penguins give you a bad idea they won’t get a sardine.”

Right now he sees opportunities post- Brexit. In particular construction, property, retail and breweries have overly suffered from the decline in sterling which, at below an exchange rate of $1.30 dollars, is “far too low.” He says he has no worries about the long-term implications of Brexit. Indeed it should benefit exporters and encourage investment in the UK. In contrast, the wider European malaise is something quite serious as unemployment and economic weakness continue to hurt continental countries and indeed the UK’s detachment from this may help it in the long run.

Of course, Mumford is aware that his views may not always be right. There have been failures along the way. He bought Northern Rock post-financial crisis thinking it couldn’t go bust – it did. He has lost money on hotel shares, hairdressers, menswear and IT companies. But a disaster, when viewed correctly, can be a great boon.

“Great disasters are more interesting than great successes,” he comments. “I think it is more interesting hearing about companies that have gone wrong and from which you can learn lessons.” Mitigating disaster is best done by keeping a very diversi ed portfolio. Mumford will usually invest no more than 1.5% in each company. At present he can keep 30 companies in the smaller fund and a similar amount in the AIM fund which spreads his risk. He also has a liberal holding period for his shares. His oldest continuous investment stretches back to 1995 while he has held one share – Dejan Property – on and off since 1988. Though he says that he also holds shares for as short a period as a few months.

Despite the pleasures of writing, Mumford has no plans to cease his main occupation anytime soon. He intends to be playing the markets well into the future and using his skills and experience to continue making returns for his clients – and, of course, feeding the penguins along the way.