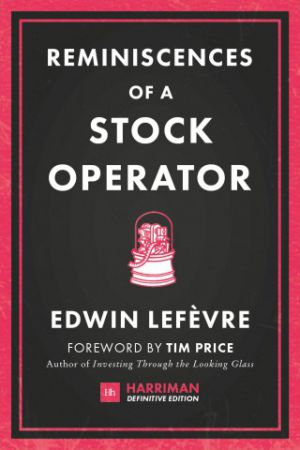 Reminiscences of a Stock Operator

Just a few weeks away from my ten-year anniversary of working in the City of London, I have taken time to look through the vast library of investment, finance and economics books I have acquired over the past decade. From The Bankers Who Sold the World, a tale of aliens buying part of Earth to save it from financial cri-sis, to the 736 page insomnia cure that is A History of Interest Rates, I have certainly built up a varied and eclectic collection over the years.

However, only a small minority of books stand out to me as being real investment classics – ones that have stood the test of time and should be in the possession of every investor due to the knowledge and wisdom that they impart. One is Popular Delusions and the Madness of Crowds, a study of human psychology and greed which, despite rst being published in 1841, is as relevant today as it was then. Another is The Intelligent Investor, Benjamin Graham's landmark work which is largely considered to be the value investor's bible.

One more classic, while perhaps being one of the worst investment books ever published in terms of its content, is the ridiculously titled: Are You Missing the Real Estate Boom?: The Boom Will Not Bust and Why Property Values Will Continue to Climb Through the End of the Decade – And How to Profit From Them. Published in 2005, just before the US housing bubble burst, the book is a masterpiece in its own special way. Read with hindsight, it exemplifies over exuberance and reminds investors to be wary of listening to self-proclaimed "experts" with their own agendas – author and realtor David Lereah was declared by Time Magazine as one of its 25 people to blame for the financial crisis of 2008/09.

Back to the real classics...

Surprisingly, I had never before come across Reminiscences of a Stock Operator, an almost century old book about stock market trading and speculation which has just been republished by Harriman House under its Definitive Editions collection. Described by former Fed Chairman Alan Greenspan as being "a font of investing wisdom", Reminiscences was first published as a series of articles in US magazine The Saturday Evening Post in 1922/23, authored by journalist, investor and stock broker Edwin Lefèvre. He passed away in 1943, but providing some element of an update to the book, fund manager and financial commentator Tim Price gives a short foreword.

Reminiscences of a Stock Operator can be described as a lightly fictionalised account or thinly disguised biography of Jesse Livermore (characterised as Larry Livingston in the book), described by some as perhaps the most famous stock speculator and greatest trader of all time. Also known as "Boy Plunger", for his ability to make money from falling share prices, as well as "The Great Bear of Wall Street", Livermore was an investor and analyst, born in Massachusetts in 1877. Plying his trade in the US during the late 19th and early 20th centuries, he was famous for making, as well as losing, several multi-million dollar fortunes during the stock market crashes of 1907 and 1929.

The book is a first person account of Larry Livingston's travails in the markets, beginning when he was fresh out of grammar school at 14 years old (in 1891) and working as a quotation board boy at a stock broker's office in New England. With a head for figures, he was able to track stock price movements in his mind, using the numbers to successfully predict future movements – but only on paper at first. After receiving a "hot tip" from a colleague he soon caught the stock speculation bug, deciding to put his theories into practice and, as it turns out, making a quick profit on his modest savings by trading with the local "bucket shops".

After that successful first trade there was no holding Livingston back and he soon quit his brokerage job to speculate full time. That was a good decision, as by the time he was 15 he had accumulated his first $1,000 – equivalent to about £21,000 today. Not bad for a teenager at the end of the 19th century.

While Livingston began his career trading his meagre wages he soon built himself up to being a major player. Following his first successful venture he goes on to have a run of winning trades, developing a reputation for "price scalping" – placing large trades to profit from only small changes in price. He becomes so adept at trading that he is even blacklisted from a number of the bucket shops he trades with.

Keen for more action, Livingston then moves to New York and the glamour of Wall Street in order to further develop his trading abilities and make his real fortune. Unfortunately, he loses money just as quickly, and in the same huge amounts, as he makes it.

Some of his Wall Street trades paid off, such as selling shares in the Union Pacific railway just before the 1906 San Francisco earthquake. And he made his first real fortune by short selling the market during the Panic of 1907, building his worth up to an estimated $3 million. However, the majority of that was quickly lost on a disastrous cotton trade.

Throughout the book we are given top tips and advice on how anyone can go about trading successfully, derived from the fictional Livingston's market experiences. Even though it was written almost 100 years ago this advice is still just as relevant today: after all whatever happens in the stock market today has happened before and will happen again. My own particular favourite hint from Livingston is that he advises against following "hot tips" on particular stocks, often given by shady characters with dodgy information. He even suggests that trading contrary to tips can be a good way of making money from them – a strategy I know would have worked handsomely with several well-known tipsters of the present day!

However, the real life Jesse Livermore did not always follow his own advice.

After the book was published he went on to grow his net worth to an estimated $100 million in 1929, again short selling the markets, this time in the famous Wall Street crash of that year. Unfortunately he saw it fall to $5 million at the time of his death in 1940. One of the lessons learned from the book is that Livermore/Livingston made money when he followed his own advice and lost it when he followed others'.

Reminiscences of a Stock Operator is a fascinating and perceptive work for many reasons. Not only does it provide an interesting historical insight into the US stock market as it was during one of the most exciting times of the early 20th century, it also gives readers a lesson on trading psychology and how to make (and lose) money. If you're a value based, long-term investor then Jesse Livermore/Larry Livingston is probably not your best role model. But this is a great read nonetheless for anyone interested in investment.