Book review: The Laws of Wealth 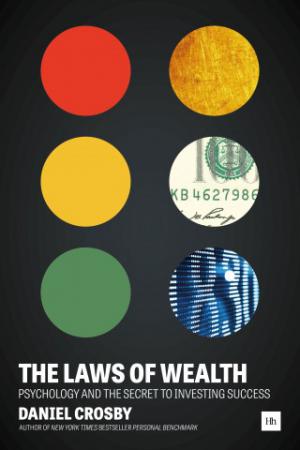 Psychologist Daniel Crosby works in the field of behavioral finance. “Given that you, as a member of the human family, have tendencies toward impatience, arrogance and a fetish for complexity, it is very likely that you will screw this up… At my last count, psychologists and economists had documented 117 biases capable of obscuring lucid financial decision-making.”

Rule #1 – You Control What Matters Most. “The behavior gap measures the loss that the average investor incurs as a result of emotional responses to market conditions.” As an example, the author notes that the best performing mutual fund during the period 2000-2010 was CGM Focus, with an 18.2% annualized return; however the average investor in the fund had a negative return! The reason is that they tended to buy when the fund was soaring and sell in a panic when the price dipped. More on volatility later…

Rule #2 — You Cannot Do This Alone. “Vanguard estimated that the value added by working with a competent financial advisor is roughly 3% per year… The benefits of working with an advisor will be ‘lumpy’ and most concentrated during times of profound fear and greed… The best use of a financial advisor is as a behavioral coach rather than an asset manager.” Make sure your advisor is a fiduciary. “A fiduciary has a legal requirement to place his clients’ interest ahead of his own.”

Rule #3 – Trouble Is Opportunity. “The market feels most scary when it is actually most safe… Corrections and bear markets are a common part of any investment lifetime, they represent long-term buying opportunity and a systematic process is required to take advantage of them.” The author quotes Ben Carlson: “Markets don’t usually perform the best when they go from good to great. They actually show the best performance when things go from terrible to not-quite-so-terrible as before.”

Rule #4 – If You’re Excited, It’s a Bad Idea. “Emotions are the enemy of good investment decisions.”

Rule #5 – You Are Not Special. “A belief in personal exceptionality causes us to ignore potential danger, take excessively concentrated stock positions and stray from areas of personal competence… An admission of our own mediocrity is what is required for investment excellence… This tendency to own success and outsource failure [known as fundamental attribution error] leads us to view all investment successes as personal skill, thereby robbing us of opportunities for learning as well as any sense of history. When your stocks go up, you credit your personal genius. When your stocks go down, you fault externalities. Meanwhile, you learn nothing.”

Rule #6 – Your Life Is the Best Benchmark. “As a human race, we are generally more interested in being better than other people than we are in doing well ourselves.” However, “measuring performance against personal needs rather than an index has been shown to keep us invested during periods of market volatility, enhance savings behavior and help us maintain a long-term focus.”

Rule #7 – Forecasting Is For Weathermen. “The research is unequivocal—forecasts don’t work. As a corollary, neither does investing based on these forecasts…. Scrupulously avoid conjecture about the future, rely on systems rather than biased human judgment and be diversified enough to show appropriate humility.”

Rule #8 – Excess Is Never Permanent. “We expect that if a business is well-run and profitable today this excellence will persist.” The author quotes James O’Shaughnessy: “‘The most ironclad rule I have been able to find studying masses of data on stock market, both in the United States and developed foreign markets, is the idea of reversion to the mean.’ Contrary to the popular idea of bear markets being risky and bull markets being risk-free, the behavioral investor must concede that risk is actually created in periods of market euphoria and actualized in down markets.”

Rule #9 – Diversification Means Always Having to Say You’re Sorry. “You can take it to the bank that some of your assets will underperform every single year… The simple fact is that no one knows which asset classes will do well at any given time and diversification is the only logical response to such uncertainty… Broad diversification and rebalancing have been shown to add half a percentage point of performance per year, a number that can seem small until you realize how it is compounded over an investment lifetime.”

Rule #10 – Risk Is Not a Squiggly Line. “Wall Street is stuck in a faulty, short-sighted paradigm that views risk as a mathematical reduction [of volatility]… a flaw that can be profitably exploited by the long-term, behavioral investor who understands the real definition of risk… Volatility is the norm, not the exception, and it should be planned for and diversified against, but never run from… Let me say emphatically, there is no greater risk than overpaying for a stock, regardless of its larger desirability as a brand.”

One of the most interesting concepts in the book is that investing in an index is not as passive as we might assume. Crosby quotes Rob Arnott: “‘The process is subjective—not entirely rules based and certainly not formulaic. There are many who argue that the S&P 500 isn’t an index at all: It’s an actively managed portfolio selected by a committee—whose very membership is a closely guarded secret!—and has shown a stark growth bias throughout its recent history of additions and deletions… The capitalization-weighted portfolio overweights the overvalued stocks and underweights the undervalued stocks…’ In a very real sense, index investing locks in the exact opposite of what we ought to be doing and causes us to buy high and sell low… Buying a capitalization weighted index like the S&P 500 means that you would have held nearly 50% tech stocks in 2000 and nearly 40% financials in 2008.”

“Once we realize that passive indexes are not mined from the Earth, but rather assembled arbitrarily by committee, the most pertinent question is not if you are actively investing (you are) but how best to actively invest.”

“Behavioral risk is the potential for your actions to increase the probability of permanent loss of capital… Behavioral risk is a failure of self… Our own behavior poses at least as great a threat as business or market risks… We must design a process that is resistant to emotion, ego, bad information, misplaced attention and our natural tendency to be loss averse.”

Crosby presents rule-based behavioral investment, or RBI for short. “The myriad behavior traps to which we can fall prey can largely be mitigated through the simple but elegant process that is RBI. The process is easily remembered by the following four Cs:

Consistency – frees us from the pull of ego, emotion and loss aversion, while focusing our efforts on uniform execution.
Clarity – we prioritize evidence-based factors and are not pulled down the seductive path of worrying about the frightening but unlikely or the exciting but useless.
Courageousness – we automate the process of contrarianism: doing what the brain knows best but the heart and stomach have trouble accomplishing.
Conviction – helps us walk the line between hubris and fear by creating portfolios that are diverse enough to be humble and focused enough to offer a shot at long-term outperformance.”
“Rule-based investing is about making simple, systematic tweaks to your investment portfolio to try and get an extra percentage point or two that has a dramatic positive impact on managing risk and compounding your wealth over time… We know that what works are strategies that are diversified, low fee, low turnover and account for behavioral biases.”

“Just like a casino, you will stick to your discipline in all weather, realizing that if you tilt probability in your favor ever so slightly, you will be greatly rewarded in the end… Becoming a successful behavioral investor looks a great deal like being The House instead of The Drunken Vacationer.”

The author quotes Jason Zweig: “You will do a great disservice to yourselves… if you view behavioral finance mainly as a window onto the world. In truth, it is also a mirror that you must hold up to yourselves.”

The Laws of Wealth is a highly-informative, well-researched book with an extensive bibliography. Daniel Crosby also wrote You’re Not That Great.