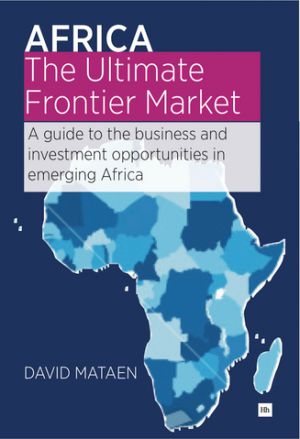 David Mataen?s book 'Africa: The Ultimate Frontier Market' offers some intriguing views on what might be achieved if recent trends in stability and productivity continue.

World interest in Africa is warming up, and historically, that has been shown to be not an entirely good thing. So while the premise of David Mataen's book is correct, there is an immediate sense of déjà vu, as well as trepidation. Perhaps, as enthusiasts will always assert, this time is different. Mataen certainly thinks and hopes so, in this practical, positive book.

It is partly a skim through recent history, part academic paper, with a journalistic format peppered by an insider's observations, as well as the meticulous data and charts one would expect from an one-time investment banker and management consultant.

Written for potential institutional and private investors, the kind of information they would need is set out in the structure, where Part I builds up the historical context, Part II sets out the trends or enablers likely to support growing business and trade, and Part III identifies some precise opportunities in different sectors.

Throughout, Mataen weaves in anecdotes that highlight future ?megatrends' - most not exclusive to Africa - that will impact any investment decisions: the demographics of different parts of the continent and the powerful cultural, political and economic changes that rapid urbanisation and technology are effecting.

A generous reference section, appendices and index, marks Africa's milestones since the 1960s. What was Katanga all about? The Lomé Convention did what, exactly? A common problem for African analysts is the colonial linguistic heritage that means few can operate effectively in English, French and Portuguese-speaking countries. Mataen clears this hurdle.
For those ready to believe and commit, there is plenty of evidence of a new order (Walmart's $4bn acquisition of Massmart can't be wrong, surely?), and a sense that this is Africa's decade. No longer just a "beer and cement" emerging markets play, the diverse markets offer scaleable opportunities in consumer retail, telecoms (where most nations have already leap-frogged obsolete technology to the digital age), manufacturing and processing, as well as the more traditional lure of agriculture, real estate and infrastructure.

The challenges of the future - climate change, water management, food security and the development of capital markets are the focus, rather than those of the past - political instability, corruption and disenfranchisement. It is an accessible, exciting and refreshing approach which even those readers not wielding millions to invest will be drawn to.

Interestingly, Mataen excludes any in-depth coverage of South Africa and its mining sector, on the grounds that the country has dominated (and perhaps skewed) perceptions of the continent for too long, and "there is far too much literature on this already". Nigeria's business community, for one, will applaud that decision, which also opens the field for other just as investable candidates.

The stats are undeniable
The stats are undeniable. In the decade to 2010, six of the world's fastest growing economies were in Sub-Saharan Africa. Sooner than most think, Angola, Ethopia, Chad, Mozambique and Rwanda will be associated with wealth, growth and innovation, rather than the desperate conflict and poverty of the past.

It is an inspiring vision. However, after making an upbeat and convincing long-term case for Africa, the book's Conclusion reads more like a disclaimer as to what could go wrong. Don't read that part (if you want to hear about the potential downside, there are plenty of other sources).

For once, suspend the cynicism of the jaded internationalist and follow Mataen as he "delves deeper into the soul and character of emerging Africa".