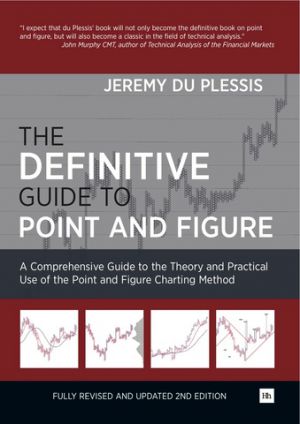 Point and Figure charts are different from any other chart used in technical analysis. The main reason being that they do not have a time scale. The chart does not advance as time passes but rather as intermediate trends change.

Their foundations were laid in the late 19th and early 20th century where traders needed an easy way of recording price movements. Initially they did this by writing down the prices traded throughout the day in columns; a rising column of numbers to denote rising prices and a falling column of numbers to denote falling prices. After awhile they began to notice patterns in their price record and so what started off as a price recording system became a charting method known as a ?Figure chart?.

As writing down prices became tedious, the numbers were replaced by Xs and the chart came to be known as a ?Point chart?. Figure charts and Point charts continued to be used together and chartists referred to their ?Point? charts and their ?Figure? charts, or their ?Point and Figure? charts, the name we use today. Figure charts eventually ceased to be used in the 1930s and in the late 1940s a new plotting method was developed using Xs for the rising columns and O?s for falling columns

As you can see, Point and Figure charts assign a value to each square on the chart, which Point and Figure chartists call ?boxes?. In the example above, each square or box is worth 1 point. As the price rises or falls by 1 point or more, new squares are filled. Any price change less than 1 point is therefore ignored. The value assigned to the box, called the ?box size?, depends on the price of the instrument and how sensitive you want the chart to be. For example, you may use a box size of 100 for the Dow, but a box size of .01 for the Euro. Reducing the box size, increases the sensitivity of the chart and therefore reduces the time horizon.

As you can see from the Figure chart above, when the price changes direction you have to move to the next column to write down the numbers in the opposite direction. If, however, the price reverses by only one box, sometimes a change of column is not required because there may be space to write the number in the current column. This became known as a 1-box reversal chart and is the original plotting method. 1-Box reversal charts can therefore have an X and O in the same column. As 1-box reversal charts were quite sensitive, a more condensed version, called a 3-box reversal chart, was also used. With these charts, the price must to reverse by at least the value of three boxes before changing columns and can therefore never have an X and O in the same column. 3-Box reversal is now the most popular Point and Figure method used today.

Remember that Point and Figure charts came from the trading floors and bucket shops where every trade was recorded. This was not a problem for anyone updating a small set of charts by hand each day, but impossible for anyone who wanted to create a new long history chart. So some users started using end-of-day prices to draw their Point and Figure charts. Two methods were used, either the close at the end of the day or the high or low at the end of the day. The end-of-day high and low cannot be used because it is impossible, without reference to the intraday ticks, to know which came first during the day. So a set of rules was devised to determine whether end-of-day high or end-of-day low are used each day.

Modern computer-drawn Point and Figure charts are constructed in a variety of ways using a variety of time-series data. For medium- to long-term analysis, either the high/low method or the close method is used with end-of-day data. The availability intraday time-series data means that shorter-term charts may be constructed using the close or high/low at the end of every minute or every hour or in fact any intraday time frame. The result is that the Point and Figure method can be used for all time frames and time horizons.

Point and Figure construction on a squared grid, with data placed into boxes, allows objective application of tools and therefore objective analysis. 3-Box reversal charts, more so than 1-box, are best used for this objective application and analysis making them a favourite amongst Point and Figure chart users. The interpretation of 3-box charts is more objective because the patterns are more defined with fewer variations than those in 1-box charts, consequently patterns can be uniquely identified. Essentially all signals from 3-box Point and Figure charts are based on breakouts. A basic Point and Figure buy signal occurs when a column Xs rises above the previous column of Xs, called a double-top buy; a sell occurs when a column of Os falls below the previous column of Os, called a double-bottom sell.

The strength of any Point and Figure pattern depends on the pattern?s width. The more columns it takes before the breakout, the stronger the subsequent signal. So a triple-top or triple-bottom leads to a stronger signal than the double equivalent.

In all Point and Figure pattern analysis, reassertion of control is important for determining pattern strength. This occurs when a pattern switches from being bullish to bearish and back to bullish again. The most common example is the catapult pattern, where there is firstly a triple-top breakout, followed by a pullback into the pattern which is then reversed resulting in a double-top breakout. The converse is true for sell patterns. The fact that, in spite of being rebuffed, a group can regain control is important for the pattern?s strength.


Many other Point and Figure patterns have been indentified and named. Not every breakout is taken as a buy or sell. Point and Figure analysts look to see if it is part of a bigger pattern, but also they take note of trend lines.

The way trend lines are drawn and used is another advantage of 3-box reversal charts. Unlike trend lines on bar, line and candle charts which must be positioned subjectively, the Point and Figure squared grid allows trend lines to be drawn at a true 45° from major lows and highs. Once a 45° uptrend from a low is broken, a 45° down trend is drawn from the high so they alternate between a bullish uptrend and bearish downtrend and show the last level of support or resistance. They have proved to be very effective indicators of the trend and allow anyone to glance at the Point and Figure chart and be in no doubt as to what the trend is. Because they emanate from a top or bottom at 45°, they are independent of subsequent price action. If however, the price does react back to an already established 45° trend line, the line?s strength is reinforced.

Once the main 45° up or down trend has been established, additional (thinner) 45° lines from reaction points within the trend may also be drawn. These are called internal trend lines and show minor support and resistance levels within the main trend. When internals cluster together, the area becomes a stronger support or resistance area. Clustering is shown in Figure 5.

Another objective feature of Point and Figure charts is price targets. Targets may be established using two methods, vertical and horizontal. The vertical method uses the first column from any top or bottom to establish the target. The length of the thrust determines the extent of the move, so the greater the initial thrust, the greater the target. The horizontal method requires a top or a bottom where there has been some sideways movement and is based on the width of the top or bottom pattern to determine the extent of the move. Both methods can be used on the chart, but there are more opportunities to use the vertical method. Figure 6 is a 15 x 3 Point and Figure chart of the S&P 500 showing some vertical and horizontal price targets. Notice how accurate they have been in both the uptrend and the downtrend, remembering that targets are established well in advance of being achieved.

Targets are a guide, it should never be assumed that they will be achieved exactly. They give an indication of the strength of the chart and provide a potential target area.

Because Point and Figure signals are so clear cut and unambiguous, it is easy to see where a buy signal has occurred and what is required to cancel the signal and consequently where a stop should be placed. This means you can calculate the risk reward ratio based on the price to target divided by the price to the stop. This tells the trader the potential number of points of reward for every point of risk taken on. Because the targets and stops are objective, these risk reward ratios can easily be calculated by a computer.

Figure 7 shows the same S&P 500 chart but as at 27th December 2011. The 1440 target has been established with two possible stops at 1200 and 1155 identified, because a break below these levels would generate double-bottom sell signals. This allows two risk reward ratios of 2.2 and 1.4 to be calculated depending which stop level is used. These ratios help you to decide, firstly whether the take the trade and secondly where to place your stop. In this example the price rose and hit the 1440 target in September 2012.