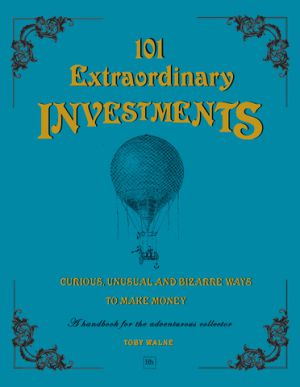 Making money need not involve risky stockmarket punts, overpaid men in pinstriped suits or dire-rate savings accounts - it can actually be relaxing and lots of fun.

Increasingly investors are finding that a hobby or interest also provides an exciting opportunity to make a profit. Alternative investments have enjoyed bumper returns in the past decade with many more than doubling in value.

From movie memorabilia to Victorian loos, the world of collectables offers some rich - and quirky - pickings.

Movie props
Movie memorabilia can provide blockbuster returns with film set props and costumes that were once thrown away as junk now selling for thousands of pounds.

Science fiction is one of the best genres for investment as it attracts a die-hard fan base that does not seem to diminish over time but only grows over generations.

When searching for investments it is best to buy something linked to a top star in a movie rather than just a piece of background scenery - and look out iconic on-screen moments.

For example, a pair of specs worn by Michael Caine as the father of Austin Powers in the movie Goldmember recently sold for £1,000 - but those worn by Mike Myers in the opening credits went for less than half this price.

Comics
The market for old comics began in the mid-1970s when nostalgic adults started rooting around for rare childhood favourites.

Thanks to parents spring-cleaning out bedrooms and throwing comics away as rubbish, few copies survive - which has sent values of survivors rocketing.

The silver age of American comics of the early Sixties is particularly sought after, which is the era when Spider-Man and the Fantastic Four were born.

A decade ago a near-mint copy of Amazing Fantasy 15 in which Peter Parker first appeared cost £15,000 but it can now fetch double this amount.

Remember: condition is key in this highly collectable market.

Golf
Golf began in Scotland in the 14th century and prices of items relating to its glorious history are soaring.

Prices vary hugely depending on quality and maker but the most sought after is 19th century craftsman Hugh Philp, whose clubs can sell for £4,000 each.

Another great is Tom Morris, widely regarded as the godfather of golf for helping turn a pastime into a sport.

The 18th century balls are called 'featheries' and were stuffed with feathers and sewn in cow's hide with wax thread.

They cost the equivalent of £100 and ensured it was a game reserved for the rich - these days the historic artifacts can fetch £10,000.

In the 1860s, a 'gutty' ball of rubber from Malaysia was introduced. These heavier balls split shafts and ushering in the era of hickory iron-headed clubs.

Investors should look for limited editions from great labels such as Bowmore, Bruichladdich, Glenfiddich, Springbank, Talisker, The Balvenie and The Macallan.

Other top collectables are from those distilleries that have since closed so the whiskies are increasingly rare, such as Brora, Dallas Dhu and Glen Flagler.

Whisky buyers who purchase it when still in the cask can escape paying duty while well looked after bottles can be stored indefinitely.

This is where they learned that local culture believed shrunken heads brought good luck - and eagerly traded their muskets for such charms.

Real heads are leathery murder victims the size of a fist but the market is littered with forgeries using old corpses, heads of monkeys and sloths.

Old toilets
The value of the most collectable Victorian loos has quadrupled over the past decade thanks to a surge in demand for authentic bathroom fittings.

The cistern-driven toilet invented in the 1880s is the most in demand as it fits in modern homes. The pottery with fine prints, such as flowers, can sell for up to £4,000 a bowl.

Top makers to look out for include Twyfords, Royal Doulton, and Jennings. Crapper is also in demand and also made 'thunderbox' wooden toilets in the 18th century that can sell for up to £2,000 each.

Investors should be aware of fine cracks hard to see with the naked eye as these can leak when flushed.

Toby Walne is author of "101 Extraordinary Investments - Curious, Unusual and Bizarre Ways to Make Money. A handbook for the adventurous collector".