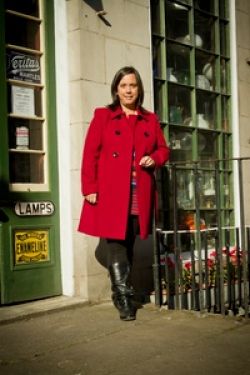 Gabriela Castro-Fontoura was born in Montevideo, the capital city of Uruguay. From a very young age, Gabriela was fascinated by other cultures. After achieving the top score in the International Baccalaureate Diploma, she was offered a rare scholarship to study Economics at the University of Durham in the UK. That was the start of a long love affair with Britain – living in England, Scotland and Wales for over 13 years. After ten years of working as a consultant, Gabriela set up her own business – Sunny Sky Solutions – with the aim of acting as a bridge between businesses in the UK and her native Latin America.

Through Sunny Sky Solutions, Gabriela has supported businesses at all stages of expanding into Latin America. From those that hadn’t even considered it to those that had done some research to those that were already present in the continent. As a process expert, Gabriela has supported businesses in various sectors such as energy, electrical engineering, marine, food and drink, financial technology and agritech. She is a strong supporter of British manufacturing and a great believer in the potential of British SMEs to export their goods and services. Her services have been used not only by UK businesses but also by those from other countries such as Spain, Holland and Australia.

A prolific communicator, Gabriela has presented on doing business in Latin America at various events such as those organised by local Chambers of Commerce across the UK, UKTI, the Institute of Export, and StartUp Britain. She is often requested to write for trade press, such as Global Trader Magazine, and contributes regularly to popular business blogs. Her Twitter feed (twitter.com/uklatinamerica) has a loyal following, too.

As a native Latin American, Gabriela always emphasises the importance of win-win in international trade. She has great belief in the potential of Latin America to grow sustainably, and insists on working only with those businesses that have something to offer that will improve the quality of life of her fellow Latin Americans.

Gabriela relocated back to Uruguay (the land of Suarez and Forlan, and of Fray Bentos pies) in January 2013, after 13 years in the UK, with the aim of supporting British businesses from within the continent. This means that she can offer her clients and the broader business community a very hands-on approach from within Latin America itself.

Gabriela is now based in Montevideo, travelling often to Chile, Peru, Colombia, Ecuador, Costa Rica, Panama, and the neighbouring Brazil and Argentina. As her expertise and contacts develop from her strategic South American base, Gabriela will continue to share news, advice, tips and anecdotes from this wonderfully rich continent. 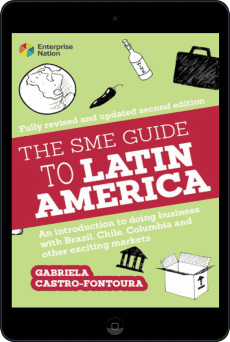 The SME Guide to Latin America
From £5