Business Reimagined: a book about business and technology that?s worth reading 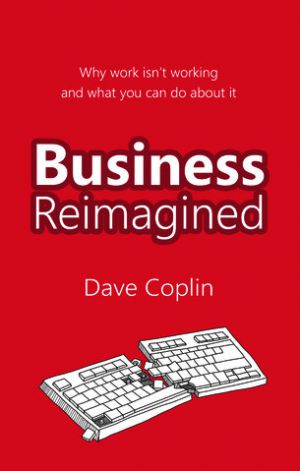 There?s a telling scene at the end of Business Reimagined, when its author Dave Coplin describes playing with the Xbox Kinect for the first time. After an hour of shouting commands such as ?Xbox play the DVD?, his seven-year-old son loses interest and wanders into the kitchen. ?Microwave ? make my tea,? comes the command, soon to be followed by the cry: ?Dad, the microwave?s bust.?
The innocence of youth, yes, but it?s also a sign of how inoculated we become as adults to different ways of working. Children expect things to work in a natural way, we expect things to work as they always have. Except Coplin is trying to break us free from our traditional office manacles, ranging from the buildings we stream to each day to the whole way management is structured.
While this isn?t a book about flexible working ? there are enough of those ? Coplin does tackle the topic head on. Building on the premise that successful businesses are creative businesses, and thus need creative people, he asks whether the open-plan office is really the environment for them to flourish.
Instead of seeing flexible working as a perk HR give to disaffected employees, it should been as a way to power the business
It?s well documented that it takes 15 minutes to build up creative momentum, and every time we?re interrupted we?re brought back to zero again. Public places such as cafés and trains, where we?re free from colleagues, the office phone and the nagging urge to check email, are the perfect setting to get real work done. So instead of seeing flexible working as a perk HR give to disaffected employees, it should been as a way to power the business.
It?s this shift in culture that sits at the heart of Business Reimagined, about giving every employee more power. After all, who better to know the needs and expectations of your customers than the person who?s serving them each and every day? And what better way to keep that employee engaged in the business?
This lack of engagement shouldn?t be dismissed. Coplin cites a survey that finds 71% of American employees are either ?not engaged? or ?actively disengaged? with their company. If you run your own company, or are part of the senior management team, you may be frightened to find out how accurately that applies to your workforce ? or to you.
Coplin makes another compelling argument about how many businesses have become so process-driven they?ve forgotten what they exist for: to serve the needs of their customers.
Take Blockbuster. In the 1980s it was perfectly set up to meet the central need of entertaining people in their homes with the latest movies, using the medium of the time ? VHS video.
Blockbuster?s reaction was to improve its processes, to cut late fines, but without tackling the fundamental question
A couple of decades later the world had moved on. Netflix was showing, with staggering effectiveness, that people?s needs were best served by streaming the latest films over the internet. For a set fee per month. Blockbuster?s reaction was to improve its processes, to cut late fines, but without tackling the fundamental question of whether it was still serving its customers in the best way.
We humans, the humble employees, tend to work in similar ways. We?ll cling onto old ways of working out of habit: Coplin cites the example of the QWERTY keyboard when measurably superior alternatives such as the Dvorak design exist. So we?ll continue to send round-robin emails despite the presence of social networks that do the job far better.
I should point that the author is a Microsoft employee ? no less the chief envisioning officer for Microsoft UK ? and there?s a certain amount of ?well he would say that, wouldn?t he?? He argues, for instance, that ?social? is the technology that will help empower employees, and the example social technology he inevitably draws on is Yammer ? the enterprise social networking technology bought by Microsoft in 2012.
It?s also tough to break away from the fact that so much of what he?s talking about ? linking workers via social tools, embracing flexible working ? can be done by embracing Office 365. While Office is never named, the book would have benefited from more balance in the examples it gives. Microsoft rivals such as Google might as well not exist in this book.
But you would do well to put such minor irritations to one side, because Business Reimagined certainly isn?t a political broadcast on behalf of the Microsoft party. Instead, at 96 pages long it?s a engaging, compact tome that could inspire business leaders to change the way they do things. Ignore its advice at your peril.