The Myth of the Rational Market

A History of Risk, Reward, and Delusion on Wall Street 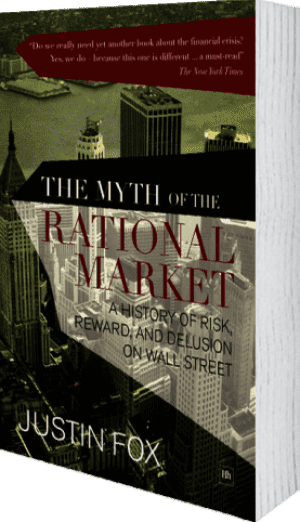 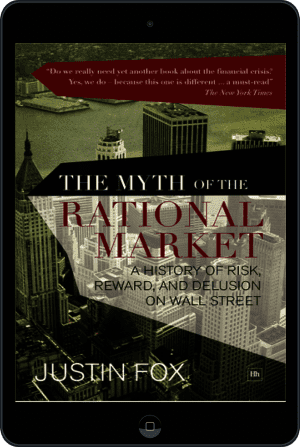 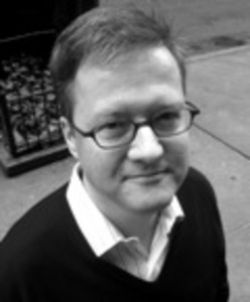 Justin Fox is the business and economics columnist for Time magazine. Previously an editor and writer at Fortune, he appears frequently on CNN and CNBC and has made exactly one appearance on 'The Daily Show' with Jon Stewart. He lives in New York with his wife and son. www.byjustinfox.com

Introduction: It Had Been Working So Exceptionally Well

1. Irving Fisher Loses His Briefcase, and Then His Fortune
The first serious try to impose reason and science upon the market comes in the early decades of the twentieth century. It doesn't work out so well.

2. A Random Walk from Fred Macaulay to Holbrook Working
Statistics and mathematics begin to find their way into the economic mainstream in the 1930s, setting the stage for big changes to come.

THE RISE OF THE RATIONAL MARKET

4. A Random Walk from Paul Samuelson to Paul Samuelson
The proposition that stock movements are mostly unpredictable goes from intellectual curiosity to centerpiece of an academic movement.

5. Modigliani and Miller Arrive at a Simplifying Assumption
Finance, the business school version of economics, is transformed from a field of empirical research and rules of thumb to one ruled by theory.

6. Gene Fama Makes the Best Proposition in Economics
At the University of Chicago's Business School in the 1960s, the argument that the market is hard to outsmart grows into a conviction that it is perfect.

THE CONQUEST OF WALL STREET

7. Jack Bogle Takes on the Performance Cult (and Wins)
The lesson that maybe it's not even worth trying to beat the market makes its circuitous way into the investment business.

8. Fischer Black Chooses to Focus on the Probable
Finance scholars figure out some ways to measure and control risk. More important, they figure out how to get paid for doing so.

10. Dick Thaler Gives Economic Man a Personality
Human nature begins to find its way back into economics in the 1970s, and economists begin to study how markets sometimes fail.

11. Bob Shiller Points Out the Most Remarkable Error
Some troublemaking young economists demonstrate that convincing evidence for financial market rationality is sadly lacking.

13. Alan Greenspan Stops a Random Plunge Down Wall Street
The crash of 1987 exposes big flaws in the rational finance view of risk. But a rescue by the Federal Reserve averts a full reexamination.

14. Andrei Shleifer Moves Beyond Rabbi Economics
The efficient market's critics triumph by showing why irrational market forces can sometimes be just as pervasive as the rational ones.

15. Mike Jensen Changes His Mind about the Corporation
The argument that financial markets should always set the priorities - for corporations and for society - loses its most important champion.

16. Gene Fama and Dick Thaler Knock Each Other Out
Where has the debate over market rationality ended up? In something more than a draw and less than a resounding victory.

Epilogue: The Anatomy of a Financial Crisis
Cast of Characters
Acknowledgments
A Note on Sources
Suggestions for Further Reading
Notes
Introduction: It Had Been Working So Exceptionally Well

1. Irving Fisher Loses His Briefcase, and Then His Fortune
The first serious try to impose reason and science upon the market comes in the early decades of the twentieth century. It doesn't work out so well.

2. A Random Walk from Fred Macaulay to Holbrook Working
Statistics and mathematics begin to find their way into the econom ...

Chronicling the rise and fall of the efficient market theory and the century-long making of the modern financial industry, Justin Fox's "The Myth of the Rational Market" is as much an intellectual whodunit as a cultural history of the perils and possibilities of risk. The book brings to life the people and ideas that forged modern finance and investing, from the formative days of Wall Street through the Great Depression and into the financial calamity of today. It's a tale that features professors who made and lost fortunes, battled fiercely over ideas, beat the house in blackjack, wrote bestselling books, and played major roles on the world stage. It's also a tale of Wall Street's evolution, the power of the market to generate wealth and wreak havoc, and free market capitalism's war with itself.

The efficient market hypothesis - long part of academic folklore but codified in the 1960s at the University of Chicago - has evolved into a powerful myth. It has been the maker and loser of fortunes, the driver of trillions of dollars, the inspiration for index funds and vast new derivatives markets, and the guidepost for thousands of careers. The theory holds that the market is always right, and that the decisions of millions of rational investors, all acting on information to outsmart one another, always provide the best judge of a stock's value. That myth is crumbling.

Celebrated journalist and columnist Fox introduces a new wave of economists and scholars who no longer teach that investors are rational or that the markets are always right. Many of them now agree with Yale professor Robert Shiller that the efficient markets theory "represents one of the most remarkable errors in the history of economic thought." Today the theory has given way to counterintuitive hypotheses about human behavior, psychological models of decision making, and the irrationality of the markets. Investors overreact, underreact, and make irrational decisions based on imperfect data. In his landmark treatment of the history of the world's markets, Fox uncovers the new ideas that may come to drive the market in the century ahead.

"They [Myth & Animal Spirits by Shiller] are both important books. Well worth reading." - Menzie Chinn, University of Wisconsin and Econbrowser

"A lucid synthesis of the ideas that went into what Fox calls the rational market." - Rob Horning, Popmatters

"What makes Fox's book so rewarding and so readable is his way with the telling anecdote." - Robert J. Hughes, SmartMoney

"[W]hat Fox has put together is a thoughtful, often fascinating, always illuminating history of the idea of market rationality, and the fortunes of the economists, bankers, regulators, philosophers and psychologists who've sought to explain the stormy seas of the market (and to get rich while doing it, of course)." - Cory Doctorow, boingboing

"Fox's explanations of technical material are superbly accurate and readable ... Clearly the result of many years of research and reading, the book isï¿½its epilogue on the ongoing financial crisis notwithstandingï¿½in no sense a rush job. Rather, it is a model of what the popularization of social science can be, but too rarely is, and it will continue to be read when the current crisis is many years behind us." - Cosmo Shalizi, American Scientist

"[T]he rare business history that reads like a thriller. ... A must-read for anyone interested in the markets, our economy or government, this dense but spellbinding work brings modern finance and economics to life." - Publishers Weekly

"An intellectual tour-de-force ... one of the two financial books I have enjoyed most this year." - Rational Man, Buttonwood's notebook, Economist.com

"A rich history world's most seductive investing idea, the efficient markets theory. The jacket copy is right to call this 'an intellectual whodunit.' " - James Pressley, Bloomberg

"Fox ... spins a fascinating historical narrative. ... Fox recognizes that true believers in the market's efficiency suffered from a 'blinkered' mindset and 'tunnel vision.' Yet I think he lets them off too easily." - Roger Lowenstein, The Washington Post

"An engaging history of what might be called the rise and fall of the efficient market hypothesis." - Joe Nocera, The New York Times

"Mr. Fox's book is really a lively chapter in the history of ideas ... Among much else, Mr. Fox presents lucid explanations of Portfolio Theory, the Capital Asset Pricing Model and Option Pricing Theory without the use of a single equation. And he brings the major players in his drama to life with an appealingly breezy style. ... With 'The Myth of the Rational Market' Mr. Fox has produced a valuable and highly readable history of risk and reward." - Burton G. Malkiel, The Wall Street Journal

"Fascinating and entertainingly told. ... Mr Fox has written a worthy successor to Capital Ideas, the late Peter Bernstein's 1990s classic on the emergence of the rational-market myth: bang up-to-date; alas, without the happy ending." - The Economist

"Do we really need yet another book about the financial crisis? Yes, we do - because this one is different ...a must-read" - Paul Krugman, New York Times Book Review

Praise for the US edition:

Justin Fox's The Myth of the Rational Market: A History of Risk, Reward, and Delusion on Wall Street (Harriman House, 2009) isn't exactly hot off the press, but I discovered it only recently. It's a ...