The Untold Story of the World's Biggest Con 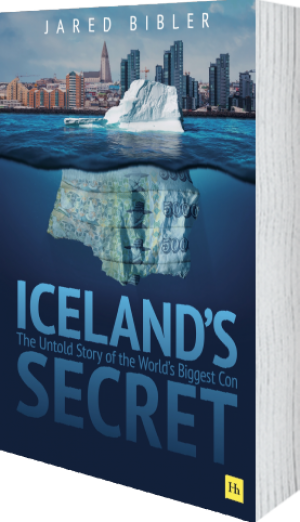 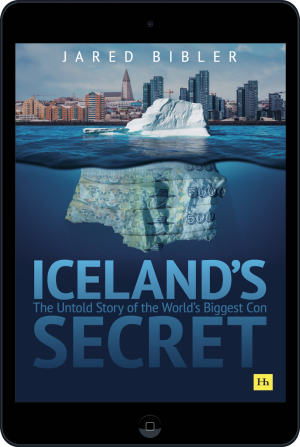 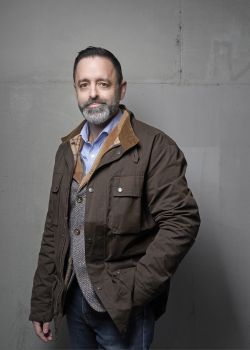 Jared Bibler is a graduate of MIT, where he studied engineering. He is also a CFA charterholder with nearly 20 years of broad experience in the global financial markets. Jared started his career in Boston and New York, where he worked as a consultant to a Wall Street giant.

Following that, he moved to Iceland where he supported the Icelandic pension funds’ foreign investments. Unhappy with ... Read more on Jared Bibler

Born in Massachusetts, Jared Bibler relocated to Iceland in 2004 only to find himself in the middle of an unprecedented financial crisis a handful of years later.

Personally wiped out and seeking to uncover the truth about a collapse that brought the pastoral country to its knees, he became the lead investigator into some of the largest financial crimes in the world. This work helped Iceland to famously become the only country to jail its bank CEOs in the wake of the 2008 crisis.

But the real story behind that headline is far more complex — and sinister.

A decade after the investigations, the story can be told at last and in full. The crisis, barely understood inside or outside of Iceland even today, is a cautionary tale for the world: an inside look at the high crimes that inevitably follow Wild West capitalism.

With the next global financial meltdown just around the corner, this untold tale is as timely as ever.

"I found myself unable to put it down." James A. Fok, author of Financial Cold War

"Perhaps the most important book I have read this year." Rory Sullivan, CEO Chronos Sustainability

"To understand how the world really works, you need to understand Iceland’s Secret." The European

"Unlike most business books, it's very accessible to the lay reader and even incorporates a sense of intrigue and action that makes it a top recommendation." Midwest Book Review

"Few people are better-equipped to chronicle this extraordinary saga than Bibler. … His book is a blend of candid personal memoir and a Nordic noir that reveals his jaw-dropping discoveries as a regulator. … Iceland’s Secret is a fantastic read. An eye-opener and a cautionary tale, it is evidence of the brazen and protracted frauds that can occur if bankers are given a free pass by a country’s journalists, regulators, politicians and government." Ian Fraser, Financial Times

“[Iceland’s Secret] goes beyond a mere portrayal of a specific crime and its far-reaching ramifications and becomes a moral tale about the depths of human greed … an admirably rigorous account of a complex event of great contemporary importance.” Kirkus Reviews

"A killer read from the heart of Iceland's epic financial meltdown. A thrilling saga of crooked bankers and the dogged investigators who took them down." Tom Ashbrook, U.S. broadcasting legend

"A new genre is born: Nordic noir but with bankers going to jail. It reads like a thriller--but amazingly it's all true." Russell Napier, bestselling author of Anatomy of the Bear

With stock markets at historic highs, memories of the 2008 crash are in the air again. Heady markets can hide a multitude of sins. One of the biggest from the '08 era is only now being fully told. In ...

With stock markets at historic highs, memories of the 2008 crash are in the air again. Heady markets can hide a multitude of sins. One of the biggest from the '08 era is only now being fully told. In ...

The book goes beyond a mere portrayal of a specific crime and its far-reaching ramifications and becomes a moral tale about the depths of human greed. It shows how, even in a nation as thoroughly ...

I wrote Iceland’s Secret because I wanted readers to see by example what could happen if we continue to let our financial systems run amok — that we all have an interest in a clean, transparent, ...

The Icelandic financial crisis of 2008 may, at first glance, seem just to be a footnote in the wider context of the 2007-9 global financial crisis and subsequent Great Recession, but this couldn’t ...

In this exclusive interview, Bibler, whose new book Iceland’s Secret: The Untold Story of the World’s Biggest Con provides a cautionary tale for the world, speaks out about his investigation and ...

Only through such reforms can we be more assured that the global financial system is fit for purpose. While those changes that have taken place are to be welcomed, continuing scandals in financial ...

In this article, Bibler, author of new book Iceland’s Secret: The Untold Story of the World’s Biggest Con—a revelatory forensic examination of one of the world’s largest financial ...

Bibler, who later joined the Fjarmalaeftirlitid (FME) investigation into the collapse, had quit his stressful Wall Street job in 2004 and moved to the tiny country after vacationing there. He ended ...

As recounted in thrilling detail in the new book “Iceland’s Secret,” the Icelandic banking scandal was a beast all its own, a whole-cloth fraud that originated a full decade before the ...

Jared Bibler is the author of the new book, ICELAND’s SECRET: The Untold Story of The World’s Biggest Con. Bibler is a graduate of MIT, who began his career as a software engineer. He ...

Unlike most business books, it's very accessible to the lay reader and even incorporates a sense of intrigue and action that makes it a top recommendation for general-interest collections, as well.

Now, in his recent book, Iceland's Secret: The Untold Story of the World's Biggest Con, he says the country's approach has neither cleaned out the Augean stables of Icelandic finance nor slain "the ...

In this first episode of the Library of Mistakes podcast series, Russell Napier explores the 2008 financial collapse of Iceland with Jared Bibler, author of Iceland's Secret – The Untold Story Of ...

he book is built around my personal story; I worked in one of those banks and saw some bad things. I couldn’t sleep at night, but I had no idea how much bigger it was. I quit my job on 3 October ...

Iceland's Secret is the winner of silver medal in International Business / Globalization category) at the Axiom 2022 Business Book Awards.

When Jared Bibler visited Iceland for the first time in 2002, he couldn’t imagine that one day he would become an Icelander himself. A native of Massachusetts in the US, he was working for an ...