Letters from the Chestnut Tree Cafe

Thought crimes in Britain and Greece (1984 is finally here) 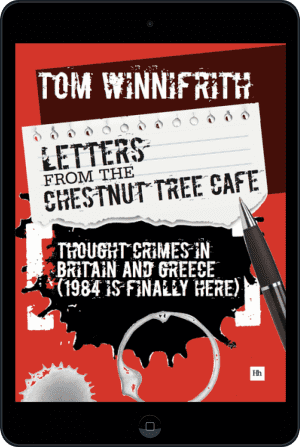 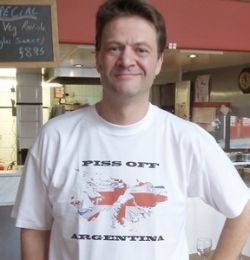 Tom Winnifrith is one of the UK's best known stock pickers, and also a well known financial broadcaster. He is a prolific writer for a number of leading UK and US websites and nearly all his work appears on his blog at www.TomWinnifrith.com

Of course if you are highly opinionated (which Tom is) not everyone loves you. His writings have exposed, lampooned, offended and ridiculed a fair few folk. But no-one is forced to read what he writes. The blog on which this ebook is based is not a democracy but very much a dictatorship. But it has its fans.

"Tom should have a career as a stand-up comedian. When it comes to investment writing, he sets the standard that we would all like to follow. Sometimes right of Genghis Khan and other times left of Bob Crowe, his words never fail to say it as it is with authority, integrity and lots of humour. A daily MUST READ full of Investment Viagra."

And so we come to this e-book. During the course of the summer and early autumn of 2012 Tom produced around 400,000 words. Articles appeared at the rate of up to nine a day. It seemed like a good idea to produce an anthology of the best of the best. Here it is. There is a lot more active material that we could not find room for here on TomWinnifrith.com - and more appears every day.

The blog on which this is based is no holds barred with content covering everything from finance to West Ham to celebs, cooking, TV, film, philosophy, politics, cats, Greece and Albania - where Tom spent most of the summer - and his wider family. The Winnifriths (little stepsister Flea excepted) are, as Tom puts it, generally a bunch of deluded lefties but that offers up scope for a few cheap jokes and apparently they do not seem to mind.

In each of the 99 articles, emails, LinkedIn and bulletin board posts or tweets appear in the ebook Tom includes an explanation of the context,of the article in question and, where possible, provide a link to the original.

The period in question saw Tom head off to Greece in late June on a one-way ticket to write a book on gold (out soon) and â??get his head together.â? Writing, walking and bird watching helped to do just that. Over the course of the articles he goes to Greece, then onto Albania, back to Greece and finally head back to the UK (Airstrip One).

The book ends in mid-October. The writing continues, on a daily basis, on TomWinnifrith.com.