The Way to Wealth

The classic work on industry, idleness and prosperity 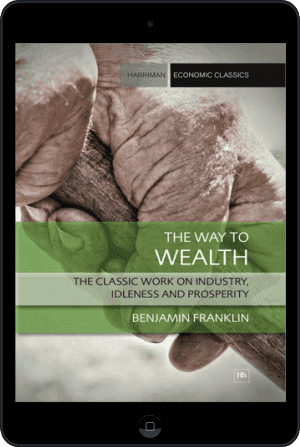 Benjamin Franklin (1706-1790) was a revolutionary in politics and in science. One of the Founding Fathers of the United States, he was responsible for breakthroughs in electricity, spectacles and French politics.

Editor's Note
Some Solid Pudding (Preface)
1. Taxed by Idleness, Pride and Folly
2. We Must Add Frugality
3. The Madness of Debt
4. The Blessing of Heaven and Unresonable Man

Editor's Note
Some Solid Pudding (Preface)
1. Taxed by Idleness, Pride and Folly
2. We Must Add Frugality
3. The Madness of Debt
4. The Blessing of Heaven and Unresonable Man

What some authors take half a shelf to say, others can convey in what amounts to scarcely a pamphlet and with greater fullness. It need not be said that such writers are rare, and their works, like Benjamin Franklin's 'Way to Wealth', rarer still. The sheer pith of 'The Way to Wealth' is impressive to this day: 3,600 words and with almost as many famous quotes and passages. Nearly every sentence delivers some nugget of brilliant wisdom, memorably expressed - axioms, apothegms and advice so industriously and eloquently distributed, that it is a prose model of the honest, hardy, no-nonsense labour it commends.

The messages of this little book remain not only as strikingly simple and memorable as when it was first written, but also surely as vital. The real opposite of modern 'get-rich-quick' guides, it provides a fascinating window into another world, and perhaps a timely antidote of common sense in an age still getting over the hangover from cheap credit, investment bubbles and runaway speculation.